Do we give the devil too much publicity?

Are you afraid of the big, bad devil? A fair share of believers are truly terrified of him, and maybe that’s overkill. Others simply allow him to take up too much of our talk.

Having just flipped the calendar to November, burying October (and Halloween) at the back of the stack, I feel a little more lighthearted than I did a few days ago. The creepy costumes and decorations celebrating death and evil are coming down all around us. Before we know it, cheery Christmas displays will take their place.

Maybe Halloween’s hyper-focus on horror and evil and gore carries a lesson for believers, even if its purveyors don’t intend that to happen. And how much extra attention do we give the adversary – all year round?

Could it be that believer who utters such things is unwittingly playing the devil’s advocate – or at least, his publicity agent? Are we giving him too much credit? Don’t we add to his notoriety when we give him too much airtime? Are we discussing the adversary to the point at which the subject becomes a distraction from the ever-victorious Gospel of the living Christ?

PT Barnum (1810-1891), the circus showman and hoax promoter, has been credited with saying

“There is no such thing as bad publicity.”

Anyone looking to drum up extra fear among foes and inflate his own reputation for doing dread would likely agree.

Sure, the devil is real, and his aim is to wreak havoc on the daily lives and ministries of the faithful.
“The thief comes only to steal and kill and destroy.” (Johns 10:10a, NIV)

That’s no joke. And that’s why the Bible instructs us many times to be informed and alert to the enemy’s ploys. Most of all, we read repeatedly that his schemes can be resisted. He is our enemy, not our excuse for our own sins or shortcomings. 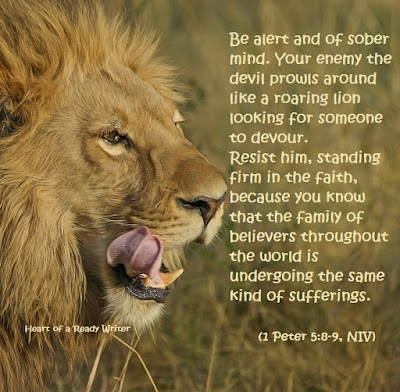 “Be alert and of sober mind. Your enemy the devil prowls around like a roaring lion looking for someone to devour. Resist him, standing firm in the faith, because you know that the family of believers throughout the world is undergoing the same kind of sufferings.” (1 Peter 5:8-9, NIV)

Lions are fierce and dangerous creatures. Although they may be breathtaking to observe, the threat they can pose to us (and many other animals) can take one’s breath away. Lions are way, way up there on nature’s food chain. The lion is the king of the jungle. As such, he deserves some distance and a hearty helping of wariness. But not terror.

We have the Lion of Judah. And He is the King of all Kings.

Jesus was born into the tribe of Judah, whose clan symbol was actually a lion. As the Lion of Judah (see Revelation 5:5), He reigns supreme.

Until the final days, the enemy may attack the people of God. He may cause harm of many kinds. But he cannot conquer the faithful. Not forever.

Maybe it’s time for us to own up to our own errors, repent of our own sins, and step into the light of freedom in Christ. May God keep us “fixing our eyes on Jesus, the pioneer and perfecter of faith” (Hebrews 12:2a, NIV).

The victory has already been won. And the Lion is getting ready to roar for real, announcing the great and wondrous Day of our Lord. Now, that’s something worth talking about.

Feel free to follow on GooglePlus and Twitter. Don’t miss the Heart of a Ready Writer page on Facebook. You are invited to visit my Amazon author page as well.
Posted by LA Nickers at 4:53 PM