Feasting among foes: Is it biblical?


Although believers are commanded to reach out to others with the gospel of grace (see Matthew 28:16-20 and other spots), the Bible also warns us about shunning outright evil (see Job 1:8 and 28:28, as well as Proverbs 3:7-8 and 14:16). The Apostle Paul exhorted the Corinthian church especially to avoid ongoing association with fellow believers who refused to turn away from obvious sins (see 1 Corinthians 5).

Sometimes it’s a necessity. It may be impossible to break away from such company – at least, for a season.

Maybe it’s a disgruntled roommate. It could be an unpleasant neighbor. It might even be an abusive family member. And the question may not be one of such folks’ own faith or personal conduct (which really isn’t up to us), but of outright hostility to us for our faith or some other reason. It could even be a matter of a certain individual’s own psychological baggage from the past.

And, at least for the moment, we’re stuck in a prolonged period with such a one.

Hey, you probably get it. We’ve just come through the holiday season.

Although December is a month of merriment for many, plenty of people endure unfavorable interactions, especially in extended family gatherings.

Simply put: Life may include times when we cannot help but break bread (or spend time) with those who berate, belittle, browbeat, and betray us. We may have to make nice (even for a while) with those who degrade, disregard, disrespect, or dishonor us.

Today, I’m looking at Psalm 23:5a in a way I never considered it before.

“You prepare a table before me in the presence of my enemies.”

Just yesterday, someone lashed out at me for someone else’s minor misstep that apparently represented his own last straw. Hurtful words exceeding even the dreaded F-bombs (Yes, that’s possible.) circled around me. I just happened to be there, in his wake, as words and fragile objects were hurled about.

I’m reluctant to haul off and call someone like that an actual enemy. But the unsolicited attack still hurts. (I cringe every time.) So the verse seems to fit.

Jesus feels our pain. It’s His pain too.

And He feeds us and sustains us, especially in those tough times. He prepares a place for us in His own presence, surrounding us with His acceptance and grace and mercy and love – even while others try to bring us down.

Someday God may call us to shake the sand off our proverbial sandals and walk away from such opposition. But He might not. In the meantime, how far are we willing to loan our cloaks and carry those packs? Can we continue to turn the other cheek, when someone persists in kicking us in the proverbial other-kind-of-cheek?

But we may still have to show up, even if others aren’t willing to grow up.

If we’re wise (and in our best moments of mental clarity and solid discretion), we’ll try hard to hold our peace on certain subjects around those who oppose or assail us. Dogs like to fight over prized items (see Matthew 7:6). So there’s that.

Can we break bread with such folks without being broken beyond repair?

Prisoners of war still eat in their cells, even though their captors lurk by the doors. Maybe, on a much smaller scale, this is sort of the same idea for some of us. And maybe we can turn that notion into intercession for those whose very lives are imperiled in such ways.

God, grant us grace. All of us.

Feel free to follow on GooglePlus and Twitter. Don’t miss the Heart of a Ready Writer page on Facebook. You are invited to visit my Amazon author page as well.
Posted by LA Nickers at 10:05 AM 1 comment:

This Italian Baroque nativity painting using light in an intriguing manner to mark the Lord’s birth. All brightness seems to come from the Baby Himself in this image, who is the Light of the world.

As is so often the case in religious art, this work depicts the Holy Family and those attending the nativity in the artist’s own ethnicity. And maybe that’s fitting, as a metaphor for the way the Lord meets each of us right where we are. As mortals, we have always needed Him, so as a mortal he appeared.

And that’s the beauty of Christmas – the incarnation of the Lord, who took on human form such as ours and lived to die for us.

Merry Christmas. May He be ever praised. 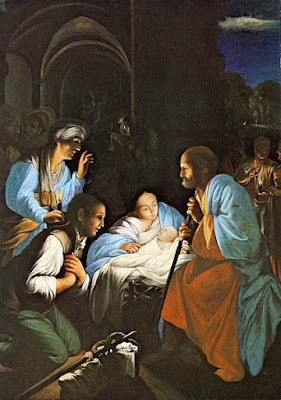 The Birth of Christ, by Carlo Saraceni, c1610

Posted by LA Nickers at 2:45 AM No comments:

Today’s nativity art pick reminds me of nearly every Advent calendar I had as a child. Remember when these annual Christmas countdown decorations used to display sacred nativity scenes, often with some glitter added for extra flair? How fun it was to open one little door each day and see what tiny picture or message would be displayed in the mornings leading up to Christmas! 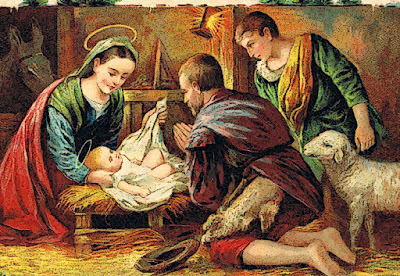 Feel free to follow on GooglePlus and Twitter. Don’t miss the Heart of a Ready Writer page on Facebook. You are invited to visit my Amazon author page as well.
Posted by LA Nickers at 9:06 AM No comments: