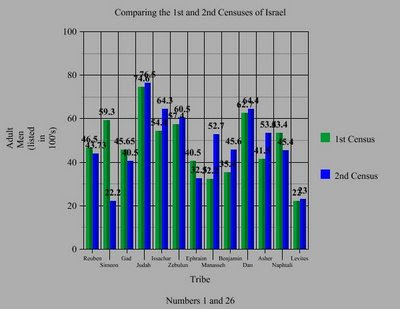 Have you ever wondered why the Lord chose to include so many genealogies and censuses in the Bible? The Old Testament, in particular, contains many listings of clan lines and head counts. Why?

Family trees matter to God. In fact, He cares about every branch of every family. The Lord concerns Himself with every member of every family He has created. As simplistic as that may sound, it is truth.

The Lord even cares about every hair on every head of every member of every family (see Matthew 10:30).

In today’s Bible reading, we find a detailed recount of the Israelites. Of course, the primary practical reason for this is probably taking attendance. The Israelites had lost many men through plagues, military conflicts and even natural causes.

God had vowed that the generation of the spies of Canaan would not enter the Promised Land. That generation, except for Joshua and Caleb, had died off. It was time to take stock of the new era.

The second census of Israel was critical as a count of the new nation, as the God’s people prepared to enter the Promised Land. The tribal tallies would help to determine the division of land among the clans of Israel.

Throughout Hebrew history, family lineages have been a priority. Even today, many Jewish families can even trace their genealogies to ancient times, perhaps even identifying the tribe of Israel from which they descended.

This is particularly important for those in the priestly line of Levi. End-time prophecy points to a reestablishment of the Temple and the priestly duties, so this will prove critical someday.

Tracing the Coming of the Lord

The New Testament begins with a detailed listing of the genealogical lineage of the Lord Jesus Christ. Coming from the tribe of Judah, Jesus fulfilled every prophecy foretold about His lineage in the Old Testament.

What a blessing it is to belong to the family of God. By accepting God’s Son, Jesus Christ, as our Master and Savior, we can become children of God and joint heirs with our Lord (see Romans 10:16-17). And the ultimate inheritance awaits in eternity, for all who will be counted with Him.

When the final census is complete, how many will be listed? May God add daily to the roster.

What a privilege to be called

A child of the Living God,

The One Most High.

How can we ever thank You enough

With Your own Son’s blood

And adopting us as Your children?

To stand up and be counted

Now and in eternity,

May we praise Your Name forever.