A dear friend is embroiled in a nearly bloody battle with her siblings over potential inheritances from their father, who is still very much alive. Supposedly, one brother is going through particularly tough financial troubles and draining his father’s coffers. The siblings are truly ticked off over what they perceive as an inequity.

If their Uncle Jake (not his real name) knew what was going on behind the scenes, so to speak, he’d have a fit. They are fighting over his funds, which have nothing to do with them at this point – and might never, if he catches wind of their antics. Seriously, Uncle Jake is likely to live another 10 to 15 years.

Are his kids gonna fight that whole time?

It would be easy for us to stand and shake our fists at such folks.

Maybe we’d try to be a bit more subtle and just shake our heads, roll our eyes, or sigh in supposed superiority. Or we might try to take sides in this conflict, which isn’t ours at all.

“Whoever brings ruin on their family will inherit only wind, and the fool will be servant to the wise.” (Proverbs 11:29, NIV)

OK, not so fast. First, who appointed us as family court for someone else’s family? And are we all that better?

Isn’t it exactly what we do with God's eternal promise?

Do we consider Heaven and wonder how big our mansions will be and how many jewels we’ll have in our crowns (compared to others)? Have we ever wondered where our seats at Heaven’s table might be located? Like the mother of Zebedee’s James and John, who questioned Jesus about eternity’s seating chart (see Matthew 20:20-28), are we jumping the proverbial gun a bit here?

Are we putting on airs, simply because we are heirs?

First, what’s an heir? The dictionary defines “heir” as someone who has legal rights of inheritance of position, property, and title of another. This may occur by descent, relationship, or legal documentation.

Jesus, the only Son of God, is Heir of Heaven. All that the Father is and has belongs to Him as well:

“But in these last days he has spoken to us by his Son, whom he appointed heir of all things, and through whom also he made the universe.” (Hebrews 1:2, NIV)

The Lord made us legal co-heirs by His sacrificial death in our place. In other words, the Heir of Heaven left the air of Heaven to bear our errors and share His eternal inheritance with us. The price He paid makes us children of God. Legally, completely, and forever.

“Now if we are children, then we are heirs—heirs of God and co-heirs with Christ, if indeed we share in his sufferings in order that we may also share in his glory.” (Romans 8:17, NIV)

“If you belong to Christ, then you are Abraham’s seed, and heirs according to the promise.” (Galatians 3:29, NIV)

“So that, having been justified by his grace, we might become heirs having the hope of eternal life.” (Titus 3:7, NIV)

And all this has nothing to do with anything wonderful we think we have done to earn or merit such reward. It is all about grace and what Jesus did for us.

What wonderful assurances of our forever home.

Based on everything the Bible says about Heaven and how it is beyond all comprehension, I am pretty sure there will be more than enough (of whatever wonders Heaven has) to go around. No one can stop it or use it up or grab it away. Not now or ever.

And, once we catch a glimpse of God in all His glory, I think it’s a fair bet, nothing else will matter.

Just being with Jesus will likely undo us.

May it ever be so.

Image/s:
Artwork adapted by this user from public domain image

Posted by LA Nickers at 2:55 PM No comments:

My heart hurts because you matter


Please forgive me, if I fail to phrase properly what is on my heart. The last thing I hope to do here is to offend someone with this message. I’ll just do the best I can, asking for grace upfront.

My heart is hurting, as people are fighting over whose lives matter. Maybe your heart hurts too. Doesn’t everyone matter? Or shouldn’t they? After all, God doesn’t play favorites. He is wholly impartial (see Deuteronomy 10:17, Romans 2:11, and Ephesians 6:9) and fair and true and just. He says we matter to Him and that we ought to matter to one another as well.

But we don't matter to each other. Or we treat each other like we don't. And when those who have been devalued for ages call for mattering, those who have never felt that deep distress call out, "Us too." It's as if we find it impossible to share the spotlight, even now.

But it's not. And it's time (way past time) for all of us to face the matter.

What does it even mean to matter?

Let’s go back to basics for a moment.

The dictionary offers definitions for this term as both a noun and a verb. As a noun, “matter” means something has physical substance, occupying space. The word can also pertain to a topic under discussion or consideration. As a verb, “matter” speaks of importance and significance.

Can we just say “Yes” to all of the above? As a matter of fact, I think we ought to go right to the heart of the matter and do exactly that. People don’t just take up space. People are important. Life matters. Human lives matter.

We are made of matter, but even more, we are made to matter. No matter what anyone says, we matter to God.

Enough with the wordplay, which I include for emphasis. While I want to stand on the roof and holler to all who will hear that I think we need to recognize the value of every life, I am not aiming for triteness. I’m not plastering simplistic memes all over social networking. Sure, plenty of those who do are well-meaning folks, aiming only to express kindness and goodwill. Others may be trying to gloss over the problem, like it's not really there.

This is not some fluffy and sweet icing, slathered over society’s very real turmoil like smearing fancy frosting on yesterday's crumbly lunchbox cupcake and trying to pass it off as a gourmet dish.

Black lives matter. Blue lives matter. Gay lives matter. Straight lives matter. And we’re all getting black and blue and bloodied by those who claim they don’t matter enough and those who argue that some may matter too much. It feels like, everywhere we turn, people are hating on one another, while calling for more significance and acceptance and welcome.

It grieves my heart to see people profiled and mistreated for bearing traits that match other people’s prejudices. How many tragedies must we witness, in which guilty ones get away, while innocent ones are slain or maimed merely for misconceptions? Misplaced blame is wrong wherever it occurs. And it happens.

We can say, “All lives matter.” And that is surely so. But historically (and even presently), some lives aren’t collectively valued enough -- by a long-shot. This cannot continue.


If we are really honest, don’t we all find disgusting pockets of prejudice (of all kinds) in our own hearts? Are we practicing any kinds of favoritism, even if we’ve convinced ourselves that we aren’t? 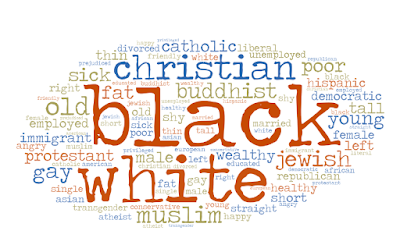 I may not have contributed directly to the massive social ills that have spanned decades and centuries and led to unfair treatment, social inequities, miscarriages of justice, and educational and career opportunity unfairness, and outright brutality. I’ve never had a hand in violence over prejudicial issues. I’ve not participated in building or shaping society’s unfair practices or biases.

But I have surely looked askance at (or feared) people who looked different, practiced different religions, supported different political ideologies (or candidates), lived by different moral codes, or were otherwise wholly unlike me. Or maybe because they just didn’t like me.

God, forgive me for hiding out in privilege, even if I was too blind to realize it.

I’ve come to loathe ethnic jokes, no matter whom they target. Go ahead. Insert your own background in the punch line. Not so funny now, right?

I hate that the proverbial glass ceiling still exists in much of corporate America. I bumped my own head on that thing several years ago. As a young executive, I was stupefied to discover the company was paying me considerably less than several men I supervised.

That gripe, though valid, hardly compares to the struggles so many still face.

Sure, all lives matter. But those who are calling for more mattering are not asking for others to matter less. They just want to matter as much as everybody else.


That’s valid. Even if their methods of calling out for mattering madden some segments of mainstream society, the message matters much. And it's way past time for the world to wake up to the value of every life.

Over the years, I have often been surprised to find that I grew soundly and surely fond of all sorts of people who are wholly unlike me. Some of my dearest friends don't look anything like me (and that's a good thing). Ideologically, there are those in my life who stand for things I abhor, but I enjoy these folks and feel real affection for them. My expectations and preconceived notions have been blown away, time and time again. That doesn’t make me special. It only means our lives have become up-close and personal. For that, I’m grateful.

I am blessed with friends of all sorts. And I am certain that God loves each of them every bit as much as He loves me and more than I ever could.

We can get all caught up in race, creed, politics, gender, or all sorts of particulars. And those things matter, as they identify who we are and what we stand for. But they simply cannot measure the worth of a person.

Still, we may have to come to know a person to recognize and appreciate that worth. Maybe it's worth the effort.

Human lives matter, simply because they matter to God. And those that are still being devalued have the greatest need to matter. Now.

But the wisdom that comes from heaven is first of all pure; then peace-loving, considerate, submissive, full of mercy and good fruit, impartial and sincere. Peacemakers who sow in peace reap a harvest of righteousness.(James 3:17-18, NIV, emphasis added) 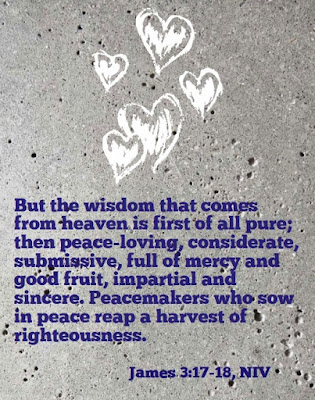 Posted by LA Nickers at 1:11 PM No comments: