Arms up or up in arms?

As a visually oriented person, I especially love the Bible passage that recounts Israel’s victory over the Amalekites at Rephidim in the Sinai region. (It’s found in Exodus 17:8-16.) Moses sent Joshua and his men out to the battle. Then Moses took Aaron and Hur up to a nearby hill to observe the scene. When Moses held his hands up, Israel had the upper hand in battle. When he lowered them, they began to lose. So Moses kept his arms up.

Eventually, Moses grew tired. Maybe his arms were sore from striking the rock at Horeb with his staff earlier (in the same chapter), when the Lord sent water from the rock to answer the people’s complaints of thirst. 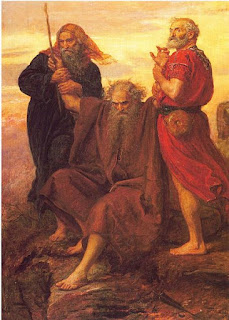 As Moses grew fatigued, Aaron and Hur stood on either side of him and held his hands up for the entire day. And Joshua’s men triumphed for Israel.

The lesson seems straightforward. Hands up meant victory. Hands down led to defeat. Hands up again, and they won the day. Maybe God was trying to paint a picture for all of us to grasp this truth of faith.

Taken out of context, this may seem like a tricky topic to get our arms around, depending upon our denominational persuasions.

I’m not going all sectarian here. I’m not claiming one form of worship is more noble than another. In fact, I’m just the sort to put my hands down, if someone stands up and instructs the whole congregation to throw them up in the air. (Hey, isn’t that sort of like arm-twisting?) On another occasion, I might spontaneously lift ‘em up.

We praise God in all sorts of ways, don’t we?

Isn’t the One we worship vastly more valid than the many ways we feebly express our adoration and awe of Him?

However we honor our great God, the gist is great. Praising the Almighty One is a powerful thing. Because God is powerful. He is Jehovah Nissi. The Lord is our Banner.

When we raise our arms to Him, figuratively or literally, are we not actually saluting the one who bids His heavenly armies to act on our behalf? 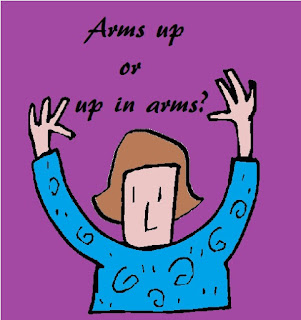 Here’s the other thing I love about this story from Scripture.

Moses had trouble keeping his hands up before the Lord. I gotta admit it: I draw some comfort from that. Moses, the famous and highly revered patriarch, needed a couple of friends to bookend him and lend their strength.

It wasn’t that he didn’t believe. But he sort of ran out of steam after a while.

Oh, I have been there.

Several weeks ago, I stumbled in the woods and broke one of my arms. The orthopedic surgeon put an extremely tight cast on it, with an aim towards totally immobilizing the bone. Unfortunately, that meant it grew pretty snug when the arm swelled, as it was wont to do. What was the solution? If I held my arm up over my head, the swelling eventually subsided, and I found relief from the pressure.

At the same time, I've needed (and learned to accept) a fair amount of help to lift and carry and push and pull and fasten and open and tie and untie and otherwise accomplish all sorts of mundane tasks. I've appreciated each person who gave me a hand during this season.

That experience brought me right back to Moses and Aaron and Hur and the Amalekites.

Sometimes the solution is pretty clear.

Let’s raise the banner, honoring Jehovah Nissi. Instead of wringing our hands, we can raise our hands and hearts to the One who has already proven His triumph. And we can help each other to keep up the praise.

Watch for the victory. It’s close at hand.

Posted by LA Nickers at 3:16 PM No comments: