30. Jesus is the greatest Gift – 30 days of thankful Scriptures

For what are we most thankful? I cannot think of a better way to wrap up this November-long series on gratitude and welcome the month of December than to trumpet our joy over the birth of Christ. 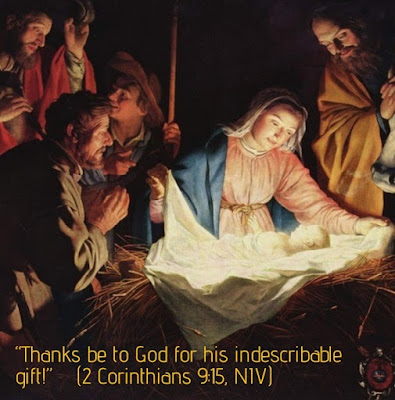 Glory to God in the highest. Joy to the world; the Lord is come.

Repeat the sounding joy. The Gift is here.

Image/s:
Adapted by this user
from Adoration of the Shepherds, by Gerard van Honthorst, 1622

Feel free to follow on GooglePlus and Twitter. Don’t miss the Heart of a Ready Writer page on Facebook. You are invited to visit my Amazon author page as well.
Posted by LA Nickers at 1:07 PM No comments:

29. The Lord’s coming fills us with thankfulness – 30 days of thankful Scriptures

Breathtaking events draw people from the hills (and everywhere else). Peculiar phenomena and momentous occurrences are like magnets to mankind.

“I’ve just gotta see that for myself,” someone might say, after hearing something remarkable has taken place. Nowadays, we might hit the internet, looking for videos and photos before entering the happening’s location in a GPS system and setting out to find the spot.

But in First century Bethlehem, the shepherds received the news from the heavenly host. Immediately, they herded up their sheep and scurried off to find the birthplace of the Savior of the world. 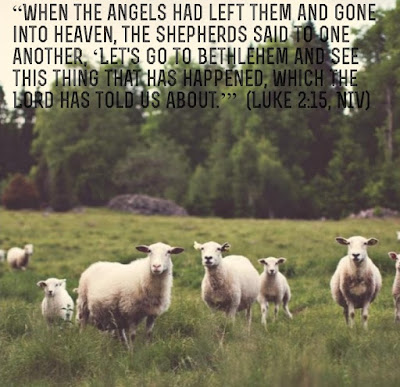 “When the angels had left them and gone into heaven, the shepherds said to one another, ‘Let's go to Bethlehem and see this thing that has happened, which the Lord has told us about.’” (Luke 2:15, NIV)

Arriving at the rustic stable, outside the overcrowded inn, the shepherds knelt and worshipped the God-made-flesh, while he slept in the hay-filled manger. The Good Shepherd curled up in swaddling cloths made His home among His own.

And we are thankful.
Image/s:
Bible verse graphic created by this user,
using online quote generator.

Feel free to follow on GooglePlus and Twitter. Don’t miss the Heart of a Ready Writer page on Facebook. You are invited to visit my Amazon author page as well.
Posted by LA Nickers at 8:29 AM No comments:

28. Glory to God in the highest – 30 days of thankful Scriptures

Yesterday, I unpacked and set up our family’s nativity set. As I set out the little lambs and the shepherds, assembling them around the manger scene, I had to wonder how they might have felt on that amazing night.

There they were, huddled on a chilly night on a Bethlehem hillside, keeping an eye on their sweet flocks. A brilliant star hovered overhead. Then the sky turned extra bright above them. An immense choir appeared and broke into song with perfect harmony.

“Suddenly, the angel was joined by a vast host of others – the armies of heaven – praising God and saying, ‘Glory to God in highest heaven, and peace on earth to those with whom God is pleased.’” (Luke 2:13-14, NLT) 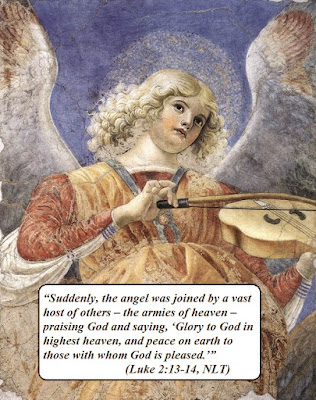 That’s what happens in the Presence of God. Angels rejoice.

Maybe those First century Bethlehem shepherds got a little foretaste of Heaven.

Feel free to follow on GooglePlus and Twitter. Don’t miss the Heart of a Ready Writer page on Facebook. You are invited to visit my Amazon author page as well.
Posted by LA Nickers at 1:19 PM No comments: