Does the LEGO theory block fellowship?


Are people like LEGO blocks, possessing only so many pegs or connecting points with which to form relationships with others? Like the popular building toy pieces, do some people have more connective capabilities than others? And what happens when those contact points are all filled?

That’s the LEGO theory of fellowship and community.

But something in the tenth chapter of Osborne's book has been bandied about by plenty of Christians lately. Maybe you've heard it. Such discussions may take his explanation out of context, but they surely can raise intriguing questions about fellowship and community.

“Introverts have a few. Some extroverts have dozens. But either way, once they’re full, they’re full. And when that happens, we tend to be friendly but to not connect. It’s what happens when you move to a new town and are excited by everyone’s friendliness, only to be discouraged three months later that you haven’t connected with anyone.”

Sorry, but I gotta say it. This concept bothers me a bit. 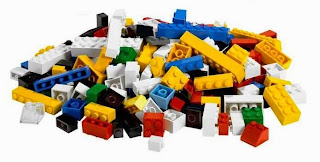 Over the years, my family has belonged to more than a few churches. We’re not exactly church hoppers, but we have moved around geographically every decade or so for career-related reasons. Suffice it to say, we have been church newcomers once in a while.

We’ve been in congregations that welcomed us warmly and immediately, and we’ve been in churches where we felt like newcomers (Read: “square pegs.”) for many years.

I’m starting to believe in the LEGO theory. At least, I have seen it in action.

About a year ago, we began attending a new church. We became members more than six months ago. And we hardly know anyone yet, although we scarcely miss a Sunday and have participated in some extra classes and activities.

We went to a newcomer dinner, hosted by a very sweet couple, and were introduced to some lovely families. One of the guys there surprised me by outlining the LEGO theory, claiming his LEGO pegs were already overloaded and that he had no room left for new connections.

I’d never heard of the LEGO theory until that evening. Frankly, I was stunned.

Can you just see Jesus, holding out one hand and shooing someone away?

“Sorry, my LEGO connectors are all taken. I’m at full capacity. Go build community with someone else.”

I joined an eight-week summer Bible study at the church and met a few folks, but I have not seen them since. Maybe we attend different Sunday services than they do.

We signed up for the church’s small group ministry last spring, and we’re waiting for the new groups to form. In the meantime, shall we point to the LEGO theory for our slow start at becoming integrated into the church community?

I’ve been accused of plenty, but never of being shy or withdrawn.

So this LEGO thing baffles me a bit, especially in a church with a reputation for friendliness and community outreach.

I like to think my own LEGO has lots of connecting points, as I genuinely enjoy interacting and forming friendships with tons of people. But, in our new church home, my LEGO is looking a little left out, with lots of empty pegs.

Outside of church, my LEGO connectors are fully loaded. But I am willing to make room, as the Lord brings new people into my life.

Does the LEGO theory hold together, or is it merely a means of justifying cliques in church?

Maybe the LEGO thing offers an accurate description – at least, in some congregations. Perhaps some people really do only possess the capacity to sustain a limited number of friendships.

And maybe that’s not what Osborne meant. But we’ve surely heard his example used that way.

I gotta believe Jesus can break through those kinds of boundaries and restrictions. What can today’s churches do – to nurture existing relationships, while making room for outreach and welcome?

Pass me another LEGO block or two, would you?


Welcome and receive [to your hearts] one another, then, even as Christ has welcomed and received you, for the glory of God.
(Romans 15:7, Amplified)