Today’s Bible reading begins with a bit of familial fretting. Miriam and Aaron bickered about their brother Moses for marrying a Cushite woman. (Moses’ first wife, Zipporah, was a Midianite. If this wife was Cushite, she was from Ethiopia. In all likelihood, this was a second wife.) 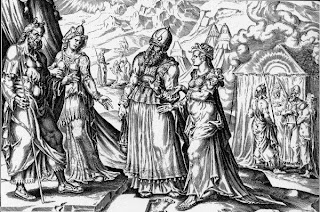 Was Moses’ marital status the real issue? Indeed, the core concern seemed to be a sense of prophetic pride.

Miriam and Aaron talked against Moses

behind his back
because his Cushite wife

(he had married a Cushite woman).

They said, "Is it only through Moses that God speaks?

Doesn't he also speak through us?"

Perhaps Aaron and Miriam truly didn’t like Moses’ wife. However, the crux of their complaint seems to be aimed more at the Lord’s choices than at Moses’. Were they jealous that the Lord spoke directly to Moses, rather than in mysterious or symbolic revelations?

Immediately, the Word of God focuses on the real issue by celebrating the humility of Moses. And Miriam was chastised for her prideful finger-pointing, as her hand became leprous. Meek and mighty Moses prayed for her, and the Lord agreed to heal her.

“Then Miriam the prophetess, Aaron's sister,

took a tambourine in her hand,

and all the women followed her,

with tambourines and dancing.”

Have we just been reminded that even prophets (or prophetesses) and praise leaders may be attacked by doubt and discouragement? Could any of us fall prey to pride or jealousy, when God reveals His secrets to another? Thanks be to God that He is willing to restore any of us when we fall. For fall we may. 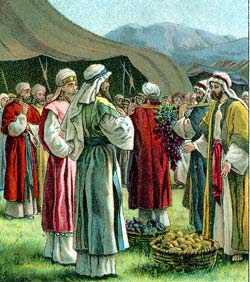 Next, the twelve spies (one from each tribe of Israel) were sent into Canaan (which would become the Promised Land) to scout out the territory. They discovered a land of abundant natural resources. At the same time, they found sizable potential opposition.

Returning to the Hebrew camp, laden with record-breaking fruit, the spies offered their report. Ten of the spies offered a bad report, discouraging Moses and the leaders from proceeding into the land the Lord had promised to them.

Joshua and Caleb alone contended that the Lord would keep His Word and bring victory to His people in the Land. 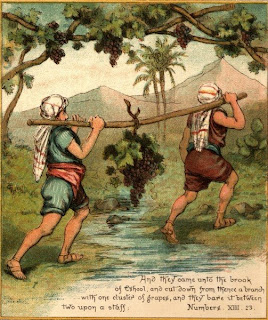 The Spies Bring Grapes from Canaan

It may be easy for us to criticize the Hebrew people as a faithless generation, mumbling and grumbling before the Lord. How readily we might point out their moaning and groaning and decide that they deserved the judgment God uttered over them.

The Lord vowed before Moses that none of the spies’ own generation, except for Joshua and Caleb, would enter the Promised Land. He would delay the arrival of His people for 40 years, until the entire generation had passed away (see Numbers 14:31-35).

What wonderful future might the Lord desire to offer to us, if we would but follow His leading? Are we willing to believe the promises of the Lord, or will we mutter and utter discouraging words about the signs of the times around us?

Surely, we may see giants in the road ahead. We may find scary reports of frightening financial times, difficult diagnoses, ponderous political issues and other daunting dangers. Are we still willing to trust the Lord to guide and guard us?

The Mighty and Holy One,

We desire to trust You.

We desire to follow where You will lead us.

We live in troubled times.

Surely, You plan to provide

To feed our bodies, minds, hearts and souls

With fruit of Your abundance.

Why do we fail to trust You?

Help us to recall

Your faithfulness to Your people

So that we may know

That Your promises will prevail.

May we look to You.