February 25th - Holiness and the Heifer

Holiness and the Heifer 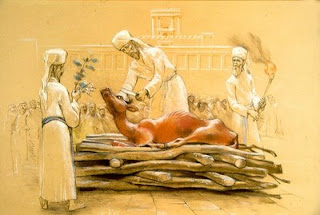 The Priests Sacrifice the Red Heifer

“The Lord said to Moses and Aaron:

‘This is a requirement of the law

that the Lord has commanded:

Tell the Israelites to bring you a red heifer

without defect or blemish

and that has never been under a yoke.

Give it to Eleazar the priest;

it is to be taken outside the camp

and slaughtered in His presence.’”

Today we have read several Scriptural instructions about purity and cleansing from all sorts of infirmities and impurities. In terms of eternity, the most significant of all of these is likely the account of the red heifer.

What is a heifer?

With a cattle farmer in the family, I can answer this quite easily. A heifer is a cow that has never borne a calf. For this reason, the heifer may be considered pure.

A red heifer is rare. The scarlet color makes the red heifer special. Perhaps its color symbolizes royalty, like the Rose of Sharon (which stands for the Messiah, Jesus Christ, the Lion of Judah). Certainly, the ruddy appearance is a reminder of the blood of sacrifice for sin.

The red heifer purified the people from the uncleanness of death.

In Old Testament times, the priests would sacrifice a rare and unblemished red heifer, burning it on the altar of the Lord. The priests would place hyssop and scarlet wool into the fire with the heifer. They would then take the ashes of the red heifer and mix them with water to purify any who had been tainted by contact with a dead body.

What a wonderful foreshadowing of the Lord’s salvation.

I will make them as white as snow.

I will make them as white as wool.’”

Death has traditionally been regarded as a model of sin. Sin and death are forever linked, and it has always been so.

The sacrificial red heifer was never to have worn a yoke.

The yoke has traditionally been seen as a symbol of bondage, captivity or restraint. Even in Old Testament times, animals were yoked together in pairs for labor. Human slaves were often placed in similar conditions.

God required the priests to select a red heifer for sacrifice that had never been yoked to another beast. This points prophetically to the spotless Savior of the world, who had never succumbed to the yoke of sin. The Son of God and Son of Man was never joined physically to another human being, and He remained pure from the bondage of evil. This allowed Him to break the yoke of sin and death.

“It is for freedom that Christ has set us free.

and do not let yourselves be burdened again

by a yoke of slavery.”

Who is the red heifer?

Could the red heifer be Jesus? The Messiah and Lord is the only One who can remove the stain of sin and death.The spotless and perfect Son of the Living God offered the final perfect sacrifice for all who will accept Him in faith.

The red heifer will return.

End-time prophecy points to a restoration of the Jewish Temple sacrifices, including the red heifer. Many archeologists, Bible scholars and other experts have researched, monitored and prepared for these events.

When the Lord Jesus returns, setting His feet upon the Mount of Olives and bringing His Kingdom with Him, will the red heifer sacrifices be restored? Will they be needed? The Lamb of God fulfilled the sacrificial requirements for all time. Perhaps the Lamb and the red heifer are one and the same.

Thanks be to God, the only One who can rescue us from our own impurities, imperfections and illnesses. Only by His grace may we stand complete and clean.

And all You speak

Give us eyes to see

And ears to hear

How we thank You

Can make us worthy.

May Your Kingdom come

For Your honor alone.