This three-paneled nativity depiction includes a few people who were not historically present at the blessed birth of Christ. The 14th century artist inserted them into the scene to add to his intended interpretation of the event. Instead of the shepherds and the magi, Gerard painted a pair of Catholic saints (in the left-hand panel) and a couple of donors (in the right-hand panel) to his work.

I find this rather intriguing.

And, as is often the custom with religious artwork, all of the figures in the image seem to be arrayed in attire fitting the historical period of the artist himself. 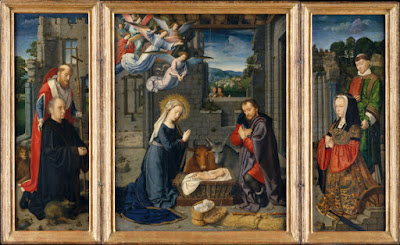 Nativity with Donors and Saints Jerome and Leonard, by David Gerard, c1510

I’d also like to know who the two individuals peeking in the window are intended to be.

Feel free to follow on GooglePlus and Twitter. Don’t miss the Heart of a Ready Writer page on Facebook. You are invited to visit my Amazon author page as well.
Posted by LA Nickers at 8:18 AM