Painted by a 17th century Dutch Golden Age artist, this image depicts the birth of Christ as a more popularly attended event than many of us may ever have surmised. Certainly, the Bible relates the arrival of the shepherds, and we can surely assume angels were present as well. We’ve also heard about the presence of livestock and Joseph and Mary’s donkey.

In this painting, however, several people may be clearly seen, including some unidentified women and children. Did they come along with the shepherds? Were they simply passing by and peeking in to see what all the commotion was about?

Here’s the question I’d most like to ask (or at least, one of the queries I can imagine): Were the mortals aware of the angelic presence? Were the angels visible to the witnesses at the Lord’s Bethlehem birthplace, or only in the artist’s eye? 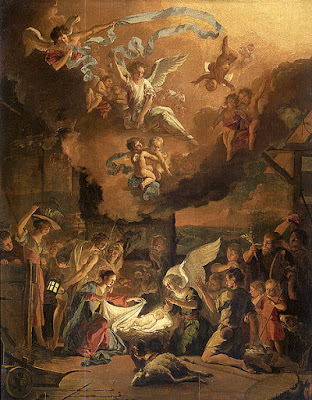 Adoration of the Shepherds, by Abraham Hondius, 1663


Intriguingly Hondius was recognized as a master painter of animals, and a few may be seen in this portrayal.