This nativity oil painting, created by a 16th Century Venetian Renaissance artist, portrays a tender moment between the Virgin Mary and her newborn baby Jesus. The child reaches both hands upward, either in affection towards His mother or in worship of the Heavenly Father.

Joseph, who again looks considerably older, leans over the infant with his own hands folded in prayer.

Angels appear over the scene, where they seem to be reading a written proclamation.

The careful viewer will also notice a crucifix in the upper left-hand corner of this work, foreshadowing the Lord’s death at Calvary. Clearly, the artist has taken a curious liberty with this inclusion, as this element is three decades before its appointed time. 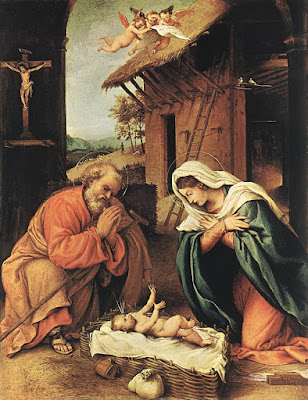