I find this old Italian nativity oil painting (which may be seen at Madrid’s Museo del Prado) to be particularly charming. Isn’t it sweet how Mary gazes fondly at her newborn, while Joseph welcomes the unusual visitors to the scene?

Just look at the bull, standing over the Christ child. Who would ever let that happen, and what child would be safe at such a moment (except the Son of God Himself)? And notice the sweet donkey face, peeking in next to the bull.

Certain art historians have drawn a parallel between this nativity scene and the burial of Christ.

In the traditional 1st century Israel tomb setting, the body was placed on a stone couch along the edge of the tomb chamber. (The long-empty Garden Tomb in Jerusalem, believed by many to have been the burial site of Jesus Christ, features such a configuration.) The placement of the manger in Barocci’s Nativity may be seen as a foreshadowing of this. 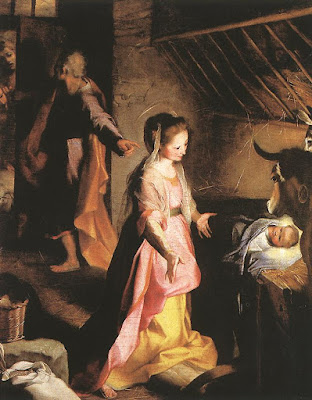