On blind spots and pot shots


Blind spots can certainly steer us in the wrong direction sometimes.

Immediately after church, I climbed into my car, revved up the engine, and cruised down the parking lot row. There, I waited for a turn to merge into the exiting traffic.

One car zipped past me. Then two, three, four, and five cars slipped right by. Not one driver seemed to notice my vehicle, idling and awaiting an entry. None appeared to notice the growing line of cars behind me, either.

I craned my neck to see if there might be some sort of blind spot, like a bush or a shrub or some other visual obstruction that prevented so many drivers from seeing fellow congregants’ cars in queue for turns. Nope, the parking lot was actually graded and bare, midway through a complete construction overhaul. There was nothing to block anyone’s view.

“C’mon, folks,” I thought. “Didn’t the pastoral prayer just mention loving fellowship, hospitality, and kindness for one another?”

Then I felt a sudden jolt in my spirit. Seriously, it hit me like an electric shock. 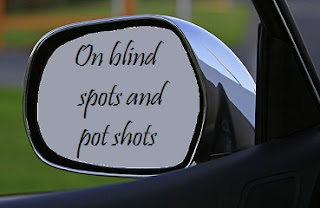 Looks like I had a blind spot of my own.

That’s sort of how it happens, when God prepares to point out areas where we need to grow and stretch and maybe just get out of His way in our lives. At least, that’s how He often works such lessons in me.

First, He catches me becoming irked about someone else’s behavior or attitude. Then He gently nudges me to reveal how I somehow am doing something all-too-similar.

I’m pretty sure that’s a telltale sign of God’s grace.

He could just let me go along my not-so-merry way, practicing my own variety of double standard until I’m somehow busted out in the open and totally humiliated for it. Or even if that doesn’t happen, He could allow me to veer way off course, missing a ministry opportunity or even falling into some real trouble.

Then He could say, “See? You were annoyed that so-and-so wouldn’t let you into the exiting traffic line after Sunday’s service, but you didn’t even notice that overtired mom standing behind you in line with her antsy kids at the post office. You could have let her go first. Now what do you have to say for yourself?”

Or the Lord might ask, “Remember how you bristled over being ignored when you tried to merge into the church traffic? How do you think I felt when you couldn’t seem to find time to meet with Me this morning? How’s that working for you today, trying to do it all on your own?”

Only God doesn’t usually work that way – at least, not if we’re willing to listen to His gentler reminders.

Our gracious God often offers us quiet guidance. If we heed His alert and repent, allowing Him to change our hearts (again), it’s all good. If we don’t, He may turn up the heat.

Maybe it’s time to look in my own mirror again, before polishing my side-view or rear-view one. It might be time for another adjustment.

Feel free to follow on GooglePlus and Twitter. Don’t miss the Heart of a Ready Writer page on Facebook. You are invited to visit my Amazon author page as well.
Posted by LA Nickers at 10:08 AM