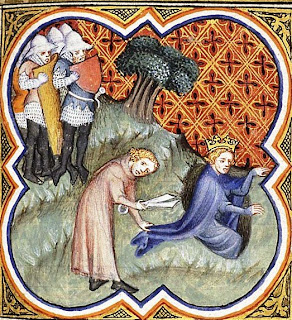 Isn’t it interesting how certain character extremes seem to go hand in hand with one another? Courage and cowardice may wage war within a single heart. Kindness and cruelty may be in conflict. Loyalty and infidelity may as well. How about overconfidence and insecurity? What a bundle of battles we humans may be.

King Saul repeatedly swore love and devotion to David, only to threaten his very life soon afterwards. Each time, when confronted in truth, the king repented, but for a brief time. Was he sincere, or merely covering his own tracks?

Furious that the priests of Nob had offered David bread and the sword of Goliath, King Saul twisted the truth and exaggerated false claims against his rival. Saul accused David of planning an attack on him and enlisting the priests of Nob in the process. He ordered his own guards to kill the priests of Nob, but the men refused.

“Then the king ordered the guards at his side:

‘Turn and kill the priests of the Lord,

because they too have sided with David.

They knew he was fleeing, yet they did not tell me.’

But the king's officials were not willing

to raise a hand to strike the priests of the Lord.”

Certainly, Saul’s guards took a serious risk, as they stood their ground against the king’s orders. Doeg the Edomite stepped in and slew the priests, along with all the residents and livestock of Nob. The false witness of King Saul led to utter destruction and slaughter.

Hearing of the tragedy, David fell on his knees before the Lord.

"Here now is the

who did not make God his stronghold

but trusted in his great wealth

and grew strong by destroying others

flourishing in the house of God;

I trust in God's unfailing love

for ever and ever.”

Rather than returning evil for evil and attacking Saul to avenge this violence, David took the matter directly to God. The faithful Lord led him in the path of righteousness, as His plan would not be thwarted.

An Opportunity for Easy Vengeance

As David hid in a cave in the En Gedi desert, an almost unthinkable opportunity arrived. The king himself entered the cave and placed himself in a most vulnerable position, not knowing David and his men were crouching in the darkness.

Still, instead of killing this easy prey, David merely crept up behind Saul and slipped a piece of the king’s robe. Later, when Saul stood outside with his men, David confronted him with the truth. Clearing up Saul’s false accusations of an assassination plot, David proclaimed his willingness to wait for the Lord to exact His own justice.

With a clean conscience, David praised the Lord.

Be merciful unto me, O God,

be merciful unto me:

for my soul trusteth in thee:

yea, in the shadow of thy wings

will I make my refuge,

until these calamities be overpast.

I will cry unto God most high;

unto God that performeth all things for me.

He shall send from heaven,

and save me from the reproach

of him that would swallow me up.

God shall send forth his mercy and his truth.

My soul is among lions:

and I lie even among them that are set on fire,

even the sons of men,

whose teeth are spears and arrows,

and their tongue a sharp sword.

Be thou exalted, O God,

let thy glory be above all the earth.

They have prepared a net for my steps;

my soul is bowed down:

they have digged a pit before me,

into the midst whereof they are fallen themselves.

My heart is fixed, O God,

my heart is fixed:

I will sing and give praise.

Awake up, my glory;

I myself will awake early.

I will praise thee, O Lord,

I will sing unto thee

For thy mercy is great unto the heavens,

and thy truth unto the clouds.

Be thou exalted, O God,

let thy glory be above all the earth.

Hallelujah. The Lord reigns. He is the only true Judge, and His purposes will prevail.

You are our Creator,

May we place our trust

As You encircle us

And guide us in Your truth.

To return good for evil

And truth for falsehood