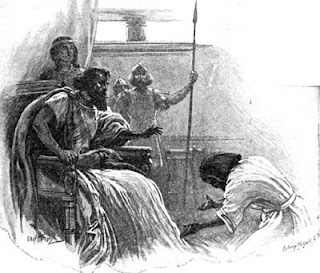 Although today’s Bible reading contains several accounts of actions and interactions within the now unsettled kingdom of Israel, one episode merits special attention.

Mephibosheth was the son of Jonathan (and grandson to Saul). Lame in both feet, Mephibosheth had sought mercy from King David earlier, and David had sworn to guard him and provide for him as a member of his own family (see April 9th entry).

“’My lord the king is like an angel of God;

so do whatever pleases you.

All my grandfather's descendants

deserved nothing but death

from my lord the king,

but you gave your servant a place

among those who eat at your table.

So what right do I have

to make any more appeals to the king?’

The king said to him,

I order you and Ziba to divide the fields.’

Mephibosheth said to the king,

‘Let him take everything,

now that my lord the king has arrived home safely.’”

Does this interaction not offer a spiritual lesson for all of us? Our dear Lord rescued us from sin and death, redeeming us with His own blood from the eternal capital sentence we deserved.

Certainly, the Lord instructs us to enter His presence boldly in prayer, presenting our needs to Him. Still, if God chose never to answer another prayer, would it not be enough that He saved us? He promises to each who will believe a place at His own table in Heaven. What other request can compare?

Forgive us for praying

With lists of what we want,

More than worshipping You

For who You are.

The gift You have already given,

Is more than we can measure.

May we recall and recount

You have already completed

And magnify Your Name.