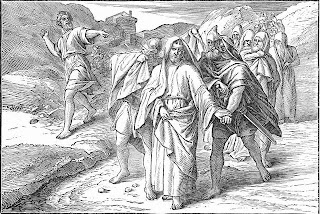 From Religion in the Home – Captivating Bible Stories

King David finally became reconciled to his estranged son Absalom. Although Absalom had been allowed to return to Jerusalem two years earlier, the father and son had not meet face to face. Nor had they seen eye to eye, after Absalom had been responsible for his half-brother Amnon’s death.

With a seed of anger growing within him, Absalom proved his mettle by setting fire to the fields of David’s military leader Joab. Gaining his attention, Absalom was able to obtain a hearing with his father, the king and regain his acceptance.

In short order, Absalom began conspiring against the king. Flattering the people, he set himself up first as a self-appointed judge and then as king of Hebron. His aim was the crown of all Israel.

Hearing of Absalom’s plans and the news that many of the men of Israel had become affiliated with him, David took his allies and fled from Jerusalem.

Why did David, the mighty warrior, not stay and fight? Could he not bear a confrontation with his son? Did he fear a loss? As the events progressed, the king’s heart became revealed.

David instructed the Levites to return the Ark of the Lord to its proper place in Jerusalem.

“Then the king said to Zadok,

‘Take the ark of God back into the city.

If I find favor in the Lord's eyes,

He will bring me back and let me see it

and His dwelling place again.

But if He says, “I am not pleased with you,”

then I am ready;

let Him do to me

whatever seems good to Him.’"

David placed his fate in the Heavenly Father’s hands. Knowing his kingly anointing came from the Lord, he was willing to trust God for the outcome. Surely, if the Lord chose to return David to the throne of Israel in Jerusalem, He would bring it to pass. On the other hand, if God opted to make Absalom the next king, then David seemed willing to accept this as well.

Although David awaited the direction and deliverance of the Lord, he did not fully relinquish the reins on the nation of Israel. Even from afar, he kept himself informed. The king strategically placed a few trusted individuals within the camp of Absalom, instructing them to offer misleading counsel to Absalom and to report inside information back to himself (see 2 Samuel 15:30-37).

By doing so, David exemplified a balanced truth that would later be expressed so eloquently by the Savior Himself:

“Behold, I send you out as sheep in the midst of wolves.

Therefore be wise as serpents and harmless as doves.”

Although a direct conflict with Absalom had not yet occurred at this point, several events pointed towards its inevitability. Mephibosheth’s servant and Shemei (another from Saul’s family) harassed him. Still, David remained faithful and forthright, taking his concerns directly to the Lord.

“I have a lot of enemies, Lord.

Many fight against me and say,

But You are my shield,

and You give me victory

I pray to You, and You answer

from Your sacred hill.

I sleep and wake up refreshed

because You, Lord, protect me.

but I am not afraid

Come and save me, Lord God!

and shatter their teeth,

and bless Your people.”

What unfair treatment or undeserved threats might we face today? Is someone throwing stones (or even nasty words) our way?

How might the Lord wish to reveal His own glory by stepping in and righting a wrong? In what difficult situations can we trust Him to intervene, rather than staging our own attacks or even defenses? Can we seek His wisdom and watch Him work His mighty wonders in our own lives?

Will we give Him the glory and honor, as He answers our prayers?

We need Your power

When we face dangers,

Remind us that You are in charge

And that You carry us in Your own heart.

And to step out in action

Only after seeking Your guidance first.

May we bring honor to You.