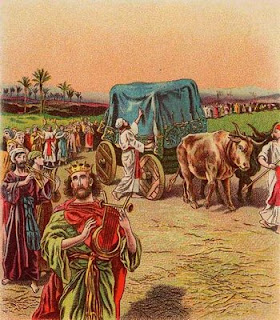 The Ark Brought to Jerusalem

Settled in Jerusalem, David was reminded that the ark of the Lord was yet to be restored to its proper place

Previously, David and his officers had attempted to move the ark from Kiriath Jearim, wheeling it on a cart. Uzzah had touched the ark with his hand to steady it and had been struck dead on the spot (see 2 Samuel 6:1-5 and 1 Chronicles 13:1-8).

This time, however, David followed exactly the instructions of the Lord. He erected a tent to house the Lord’s ark and appointed the Levites to carry it upon poles.

“Then David summoned Zadok and Abiathar the priests,

and Uriel, Asaiah, Joel, Shemaiah, Eliel and Amminadab the Levites.

He said to them,

‘You are the heads of the Levitical families;

you and your fellow Levites

are to consecrate yourselves

and bring up the ark of the Lord,

the God of Israel,

to the place I have prepared for it.

It was because you, the Levites,

did not bring it up the first time

that the Lord our God broke out in anger against us.

We did not inquire of Him

about how to do it in the prescribed way.’

So the priests and Levites consecrated themselves

in order to bring up the ark of the Lord,

the God of Israel.

And the Levites carried the ark of God

with the poles on their shoulders,

as Moses had commanded

in accordance with the word of the Lord.

David told the leaders of the Levites

to appoint their brothers as singers

How often do we set out with well-intentioned plans, seeking to honor the Lord, without seeking His guidance before we go? At what cost might we unwittingly move out in a misguided direction? How patient our great God is with His people, as He eagerly awaits our requests for His wisdom.

The return of the ark was heralded with singing, dancing and celebrating. David led the procession, dancing in the streets. His wife Michal was mortified by his exuberant display, but David was unruffled (see 2 Samuel 6:16 and 1 Chronicles 15:29).

Once the ark had been placed in its proper location and appropriate sacrifices had been made, King David hosted an all-out fellowship banquet to celebrate the return of the Lord’s ark. In royal hospitality, he provided breads and cakes for all of the people. Then he appointed Levites to lead the people in worshipping the Lord.

Finding Words of Praise for God

With his whole heart devoted to God, David presented eloquent psalms of praise to Him. His divinely inspired words offered worship to Jehovah, while giving the people a model for adoring Adonai.

David’s words have led the faithful in worshipping God for millennia. As he traced the Lord’s history of faithfulness to His people (from Abraham and Jacob to Joseph and Moses and beyond), David built the faith of the children of Israel. Surely, the Lord has used these lines to guide countless generations in trusting, following and giving glory to Him.

“O nations of the world, recognize the Lord;

recognize that the Lord is glorious and strong.

Give to the Lord the glory He deserves!

Bring your offering and come into His courts.

Worship the Lord in all His holy splendor.

Let all the earth tremble before Him.

Tell all the nations, “The Lord reigns!”

The world stands firm and cannot be shaken.

He will judge all peoples fairly.

Let the heavens be glad, and the earth rejoice!

Let the sea and everything in it shout His praise!

Let the fields and their crops burst out with joy!

Let the trees of the forest rustle with praise.”

Here’s a classic worship chorus, based on this Bible passage, penned by King David of Israel:

God of peace and power,

Teach us to listen to You,

Even as we praise Your Name.

To ask You for directions

Before we set out.

To give You glory.