As King of Israel, David faced a seemingly never-ending series of conflicts with neighboring nations. However, his most significant battle was within, as he struggled with temptation. Still, the Lord did not let go of David, drawing him to repentance and restoration, even from such daunting misdeeds as adultery and murder.

Is anyone beyond the reach of the Lord’s love?

After many years of military service, King David remained home from the wars with the Philistines, Ammonites, Arameans and others. While Israel’s army met giants, chariots and other dangers, the king stayed at Jerusalem (see 2 Samuel 21:18-22). David directed the military operations from afar, delegating on-site leadership to his trusted leader, Joab.

Perhaps David ought not to be faulted for removing himself from the battle lines. It is quite likely that the Lord spoke prophetically through his men, when they urged him to stay in Jerusalem:

"Never again will you go out with us to battle,

so that the lamp of Israel will not be extinguished."

Israel’s king was needed in Israel. Still, David may have had a little too much leisure. Perhaps that’s what led him into distraction. Are we not all more vulnerable to temptation in our idlest moments? Does not boredom often bait us more often to sin than industry?

King David found himself restless one night. He could not sleep. Probably, he was concerned about the welfare of his soldiers and the kingdom. The king took a stroll on the flat room of his palace. From this vantage, surveying the city, David spied the lovely Bathsheba bathing. He sent for her and slept with her, and she became pregnant. 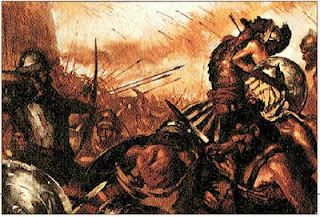 Uriah the Hittite Slain in Battle

Sin Compounded by a Cover-Up

To make matters worse, David tried to hide his sin. Summoning Uriah the Hittite (Bathsheba’s husband) from the battlefront, David urged him to spend a night at home with his wife. Surely, the king hoped to conceal his involvement in Bathsheba’s pregnancy. At this point, perhaps David intended to turn away from a continued relationship with her, so that she might be reconciled to her husband.

But Uriah refused to return home. Again, David instructed Uriah to sleep at home, this time plying him with drink. Still, Uriah did not enter his home.

Finally, the king cooked up a scheme to have Bathsheba’s husband killed, ordering Joab, his military commander, to place Uriah in the front lines of the battle. This action marks a turning point for David, indicating he intended to take Bathsheba as his own. Here, David heaped sin upon sin, adding murder to adultery.

What a cost may be carried by such intentional sin? How often does the Lord offer us opportunities to repent of our sin immediately, rather than compounding it by concealing it with additional iniquities? What harm might we often cause ourselves and those we love when we insist upon continuing on our own destructive path? 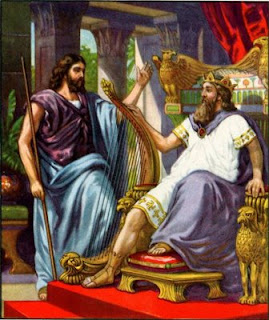 King David Is Learning to Give Up His Own Way

Confronted with the Truth

David took the widowed Bathsheba as his wife, but this displeased the Lord he loved (see 2 Samuel 11:26-27), the One who had anointed him and appointed him as King of Israel.

The prophet Nathan confronted the king with a parable that pointed out his sin. And David repented. David’s psalm of contrition offers a wonderful model of authentic confession for any of us, as we seek to turn from our own sin (see Psalm 51).

“Create in me a clean heart,

and renew a right spirit within me.

Cast me not away from Thy presence;

and take not Thy Holy Spirit from me.”

Many hymnists and songwriters have based classic compositions on this Bible passage, penned by King David the psalmist. Here’s “Create in Me a Clean Heart,” by Keith Green:

We confess that we have strayed.

In the words we have spoken,

And in the deeds we have done

That you offer grace

To those who will ask

Is unchanging and unending.

And reveal to us

We may try to keep from You,

The God who already sees all.

We only want to honor You.

To resemble Your own.