A King Is Crowned

A King Is Crowned 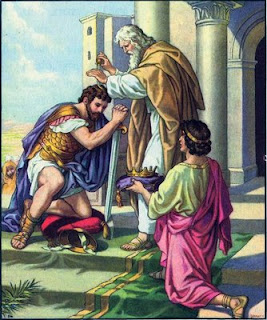 David Is Crowned in Hebron

At last, David was crowned king. But the Lord’s plan for his reign was not yet complete. The kingdom was divided, with David ruling over Judah and Ish-Bosheth (son of the late King Saul) ruling over Israel.

The nation was torn by civil war, with the Lord’s chosen people fighting against one another. The legacy of conflict, begun by King Saul, continued, although God had promised David that He would make him king over all of Israel.

Many men were lost in the conflicts, including several brave and mighty warriors. Israel’s Abner (son of Ner) and Judah’s Joab (son of Zeruiah) became embroiled in the conflict. Abner killed Joab’s brother Asahel with the butt of his spear. Joab and his remaining brother Asahel pursued Abner. Finally, Abner pleaded for peace.

“Abner called out to Joab,

‘Must the sword devour forever?

Don't you realize that this will end in bitterness?

How long before you order your men

to stop pursuing their brothers?’

‘As surely as God lives,

if you had not spoken,

the men would have continued

the pursuit of their brothers

“So Joab blew the trumpet,

and all the men came to a halt;

they no longer pursued Israel,

nor did they fight anymore.”

What influence a steadfast leader may have for peacemaking and preventing divisiveness among the people. By relenting from his mission of revenge, Joab probably averted an all-out war between Israel and Judah.

For seven and a half years, the kingdom remained divided, with battles and bitterness springing up. Finally, King Ish-Bosheth offended military leader Abner, accusing him of sleeping with Saul’s concubine. Incensed, Abner swore allegiance to David. However, Joab discovered that Abner had met with David and assumed Abner was merely spying and planning an attack. Joab set upon Abner and killed him.

Hearing of Abner’s death, David mourned, even walking behind his bier in a funeral procession. Afterwards, King David fasted and wept over the loss of the honorable soldier.

What tragic results may ensue from unresolved bitterness and unforgiven sin?

Ish-Bosheth, Israel’s king, feared for his own life, when he heard of Abner’s death. Indeed, his fears proved well-founded, when two Benjamite leaders (Baanah and Recab) murdered him in his own bed. Toting the king’s head to David, Baanah and Recab likely expected a reward or honor for killing Ish-Bosheth (see 2 Samuel 4:7-12).

However, King David demanded their death for slaying their king, even as he had ordered the death of the man who had claimed to kill Saul (see 2 Samuel 1:1-11).

All of Israel reunited in loyalty to David, and the nation’s elders crowned him king (see 1 Chronicles 11:1-3).

The Lord’s promise was fulfilled, with His appointed one, David, upon the throne of Israel. David’s first wife Michal (daughter of Saul), was returned to him (see 2 Samuel 3:14-16).

With the nation now regathered, David ordered a census of fighting men from each of the tribes of Israel. Occurring in about 1004 B.C., this count revealed that the Israelites’ numbers had dropped sharply since the days of Moses (see February 13th entry).

“All these were fighting men

who volunteered to serve in the ranks.

They came to Hebron fully determined

to make David king over all Israel.

All the rest of the Israelites

were also of one mind

The men spent three days there with David,

for their families had supplied provisions for them.

Also, their neighbors from as far away

as Issachar, Zebulun and Naphtali

on donkeys, camels, mules and oxen.

There were plentiful supplies

for there was joy in Israel.”

Surely, the process had been painful, and the cost had been dear. But the nation of Israel was established with the Lord’s chosen one leading, “and there was joy in Israel.”

How mighty and wise You are.

Guard us from the guilt

Of fighting among ourselves

Even as it already is