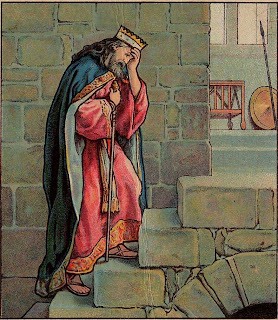 Absalom’s rebellion against his father, King David, reached its peak. The young man mustered his forces to attack his father and take the throne of Israel. Despite Absalom’s plotting, the Lord was clearly in charge.

Making his way through a thick forest on a mule, Absalom became entangled in a tree. With his head stuck, he was separated from his mount and suspended in the air. What a predicament.

Generally, a mule will not move very quickly, so this turn of events is quite odd. Perhaps Absalom was not looking where he was going. Maybe he was distracted by the prospect of power or blinded by his rebellious pride. In any event, his plan was thwarted. Certainly, the hand of the Lord was evident.

Joab, David’s military leader, and his men killed Absalom, as he dangled from the tree. They buried his body in a pit and covered it with boulders (see 2 Samuel 18:9-18).

“The king was shaken.

He went up to the room over the gateway and wept.

As he went, he said:

My son, my son Absalom!

If only I had died instead of you –

What a painful situation for a father to face. David had already lost his son Absalom to rebellion. Still, even as Absalom had orchestrated his violent advance against his father, David had warned his men not to harm the young man (see 2 Samuel 18:5).

By doing so, David modeled the heart of the Lord, who rescued us, even while we were still his enemies.

“But God demonstrates His own love toward us,

in that while we were yet sinners,

Christ died for us.”

After Absalom died, David lamented that he had not had an opportunity to take his place. Although Absalom had sworn enmity to his father, David would still have been willing to die a vicarious death, in place of his child.

What a picture of a parent’s love.

Is there a parent alive who has not felt the pain of a child’s rebellion or rejection? Do mothers and fathers not persist in passionate protective love for their offspring? Will we not cling violently to our allegiance to our children, even if they choose dangerous and destructive paths? Does anything tear at a parent’s heart more than watching a child bent on rebellion? And will a parent not go to any lengths to rescue a beloved child, whether that child appreciates us or not?

Did not our blessed Lord actually do precisely that for us?

How blessed we are that our Heavenly Father loves us beyond measure. Can we even begin to comprehend the loving-kindness of the Lord, who placed His own body into the hands of death for us, even before we knew Him and loved Him? What a wonderful God we serve.

How we thank You

For Your undying love,

Which lead You to die for us.

And tug us back

From our own rebellious ways

Where we have strayed

Or disobeyed Your leading.

Keep our feet on Your path,

For You truly have our best interests at heart,

And we live to honor You.

That You guard and keep

For You love them

Even more than we do.

Teach us to trust You more.