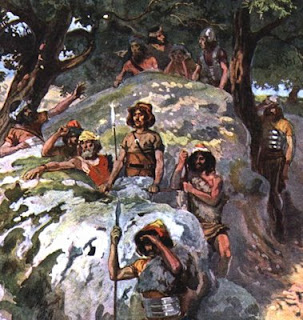 David, having escaped the wrath of King Saul again, traveled to Nob, where he met with Ahimelech the priest. Ahimelech was the grandson of Phineas and great-grandson of Eli. As David and his small band of men had kept themselves consecrated, touching nothing unclean, Achish gave him the second-day consecrated bread and the sword of Goliath.

“Be merciful to me, O God, for men hotly pursue me;

all day long they press their attack.

My slanderers pursue me all day long;

many are attacking me in their pride.

When I am afraid,

I will trust in You.

In God, whose word I praise,

in God I trust; I will not be afraid.

What can mortal man do to me?”

How often does the Lord offer seemingly nonsensical solutions to our troubles, which actually work out to be wisdom in the end? David avoided a skirmish with the Gathites by pretending to be out of his mind. As King Achish turned from his plan to assail David, who thanked the Lord for his deliverance.

“I asked the Lord for help,

and He saved me

from all my fears.”

Surely, the stage was now set for the Lord to build an army for his anointed leader, David.

At this point, David was regarded as a renegade in his own homeland, for King Saul had branded him an outlaw with a price upon his head.

Once again, God had other plans. David’s brothers and several others joined him as allies. The Bible account describes many who enlisted in David’s forces.

“Everyone who was in distress,

and everyone who was in debt,

and everyone who was discontented

and he became captain over them.

Now there were about four hundred men with him.”

The Lord delights in surprising the prideful. Certainly, He was gathering an astonishing army for a victory to come, a triumph He had already ordained in Heaven.

You are my refuge,

my portion in the land of the living.

Attend to my loud cry,

for I am brought very low;

deliver me from my persecutors,

for they are stronger than I.

Bring my life out of prison,

that I may confess, praise,

and give thanks to Your Name;

the righteous will surround me

and crown themselves because of me,

for You will deal bountifully with me.”

Is there anything the Lord cannot do with even the weakest forces, if they are only surrendered into His mighty hand?

As David gathered his army in the desert, the strongest warriors of the tribe of Gad decided to join him. These mighty men are described in vivid detail.

“Some brave and experienced warriors

from the tribe of Gad also defected to David

while he was at the stronghold in the wilderness.

They were expert with both shield and spear,

as fierce as lions

and as swift as deer on the mountains.”

David’s base of support was growing stronger each day, particularly as these skilled military leaders trained the others for the conflicts to come.

Who among us would not desire to be described as both brave and experienced in the battle for the Lord? Our Savior is described as “The Lion of Judah” (see Revelation 5:5). What Jesus lover would not wish to look just like Him?

May the Lord quicken us, so our feet may move swiftly when He calls.

Full of love and mercy,

That we may serve You

With boldness and honor,

For days to come

For Your Name’s sake.