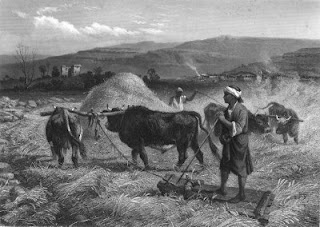 A pair of major tribulations struck the people of Israel during the reign of David. First, a three-year famine besieged the nation. Seeking the Lord’s counsel, David addressed the root issue behind the famine and remedied the situation.

The harshness of this judgment is certainly difficult for us to understand in our modern civilization, but the course of events does provide a vivid example of the link between man’s spiritual condition and the absence of presence of God’s hand of blessing in daily life.

Next, a pestilence afflicted the people, following a deliberate sin on David’s part.

By satanic suggestion, David had ordered a census of Israel’s fighting men. Even his military leader Joab had counseled against doing so.

Why was David’s census such an issue to the Lord?

God had been merciful with David, even after he committed adultery with Bathsheba and had her first husband killed in battle. The Lord had restored David and led him to victory in countless battles. Why would God take such a stand over David’s numbering of the men of Israel?

Perhaps this was an issue of faith. Although David had led his ground troops into war many times, the Lord had surely won each battle on a much more critical plane. If David truly trusted God, would he really need an up-to-date head count of his own fighting forces?

The Bible does clearly indicate that the initial idea for the new census did not come from the Lord, but from satan (see 1 Chronicles 21:1). The mere mention of this reveals that David took unwise counsel in ordering the count.

How often might we, even unwittingly, listen to dangerous counsel and make unwise decisions without consulting to Word of the Lord? What makes us most vulnerable to such suggestions?

Apparently, God was greatly displeased by David’s disobedience. A severe consequence followed, in the form of a plague upon the nation. Some 70,000 were killed.

“God was very displeased with the census,

and He punished Israel for it.

Then David said to God,

‘I have sinned greatly by taking this census.

Please forgive my guilt for doing this foolish thing.’

Then the Lord spoke to Gad, David’s seer.

This was the message:

‘Go and say to David,

“This is what the Lord says:

I will give you three choices.

Choose one of these punishments,

and I will inflict it on you.”’

So Gad came to David and said,

‘These are the choices the Lord has given you.

You may choose three years of famine,

by the sword of your enemies,

or three days of severe plague

as the angel of the Lord brings devastation

throughout the land of Israel.

Decide what answer I should give the Lord who sent me.’

‘I’m in a desperate situation!’

‘But let me fall into the hands of the Lord,

For His mercy is very great.

Do not let me fall into human hands.’”

David repented of his rebellion, pleading with the Lord to withdraw His hand of judgment and the plague upon Israel.

“When David saw the angel, he said to the Lord,

‘I am the one who has sinned and done wrong!

But these people are as innocent as sheep –

what have they done?

Let Your anger fall against me and my family.’”

The Lord’s angel instructed David to build an altar on the grain-threshing floor of Araunah the Jebusite, who offered to give David the spot at no cost, along with oxen and wood for a burnt offering to God. David refused to accept the gift, insisting on purchasing the threshing floor at a full purchase price in silver.

“Then the king said to Araunah,

‘No, but I will surely buy it from you for a price;

nor will I offer burnt offerings to the Lord my God

with that which costs me nothing.’

So David bought the threshing floor

and the oxen for fifty shekels of silver.

And David built there an altar to the Lord,

So the Lord heeded the prayers for the land,

and the plague was withdrawn from Israel.”

David’s repentance was sincere, and so was his commitment to offer a genuine sacrifice to the Lord. What good would a sacrifice be, if it required no sacrifice on David’s own part? The Lord had not asked Araunah to donate anything, but only David.

David followed God’s instructions carefully and correctly this time, and the plague was lifted from Israel.

This passage is quite convicting, even in modern times. How easy can it be to make offerings to the Lord which cost us little or nothing? In what ways might we try to give God a share of our surplus or something less than our best? Are we willing to offer our Heavenly Father our time, our talents, our treasures and all that we have? Do we remember the Source of every good thing, as we recount our many blessings?

The Lord offered us everything by sacrificing His own Son to redeem us. What could we give Him that could even come close?

The threshing floor became an altar to the Lord. This site would later be transformed into the great Temple, which would be built by David’s son Solomon. Although David desired to construct a Temple for God, the Lord instructed him that this task would be given to Solomon.

David amassed valuable resources for the Temple construction and urged Solomon and all of the leaders of Israel to seek the Lord’s direction for the undertaking.

“Now devote your heart and soul to seeking the Lord your God.

Begin to build the sanctuary of the Lord God,

and the sacred articles belonging to God

into the temple that will be built for the Name of the Lord."

We long to love You

And with greater devotion.

And all that we have,

Which has come from Your hand.

Between the many voices

And to listen to Your leading.

Our lives are in Your hands.