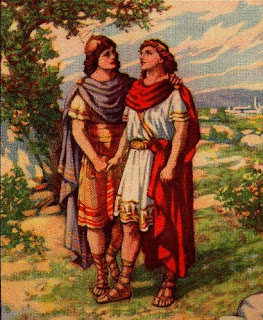 Jonathan and David, the Best of Friends

What are the qualities of a true and faithful friend? How can we recognize the very best among our friends? How can we become the best possible friends to others?

Today’s Bible reading focuses primarily on David and the people closest to him during a critical point in his preparation for leading the Lord’s people.

Having proven his faith in the Lord and his valor in battle, slaying the giant Goliath and emerging victorious in many battles, David held the favor of the people. King Saul offered him increasing responsibilities and rank within the kingdom. Soon, the women of Israel began singing the praises of this promising young man.

‘Saul has killed a thousand enemies;

Although the women’s accolades for David were authentic, his achievements were perhaps exaggerated. And what was the result? King Saul became jealous, opening his spirit to bitterness, resentment and rage. Several times, the king threatened David’s life, even attacking him personally on many occasions.

Despite his mistreatment, David clung to his personal integrity. He continued leading Saul’s armies against the nation’s enemies. When Saul offered David his own oldest daughter (Merab) in marriage, according to his initial agreement (see 1 Samuel 17:25), David claimed he did not deserve such status. Finally, as Saul’s younger daughter (Michal) was in love with David, the king presented a tall order for her hand, and David met the bill.

In all these events, David demonstrated self-control, humility, authenticity and honor. Are these not marks of a worthy friend? Surely Michal and Jonathan, the king’s own daughter and son, recognized these attributes and swore their own allegiance to David, preferring him over their own father.

Saul Throwing His Spear at David

Having thrown his own spear in rage at David on multiple occasions (see 1 Samuel 18:10-11 and 1 Samuel 19:9-10), Saul became determined to kill the rising star. When these crimes of passion failed, the king plotted more deliberately. David knew he had to flee for his life.

Saul instructed his men to murder David in his own home, but the king’s daughter Michal hatched a plan to deceive the men and allow her husband to escape. Risking her own life, she stood up to her father, as David fled. Surely, his own daughter’s clear choice of allegiance to David over him only added to Saul’s jealousy and resentment.

When a father’s rage becomes dangerous, are there not times when children (particularly grown children) must stand up for what is right? 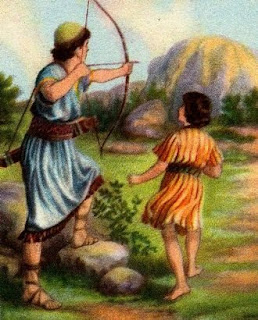 Jonathan recognized the value of David’s character and friendship and entered a covenantal relationship with him, swearing loyalty for life and for future generations. On several occasions, Jonathan saved David’s life, as his father sought to slay him.

Jonathan’s devotion to David was not without a price. Ashamed of his father, the young man risked his own position and perhaps his life to protect his friend. This only enraged the unstable and abusive Saul more.

In fact, perhaps the only actual citing of an obscenity in all of Scripture occurs in 1 Samuel 20:30, where Saul shrieked at his own son in rage. The king shouted curses at Jonathan, even besmirching his mother’s honor. How far had Saul fallen from the Lord’s favor and from his own integrity and faithfulness as a leader of God’s people?

How easy may it be for sin to build upon sin, particularly heart issues, such as jealousy, bitterness and pride?

Jonathan clung to his own integrity and upheld his covenant of friendship to David. In subsequent readings, we will discover how this oath of honor extended to future generations.

To be called Friends of God.

Even as You are loyal.

Instruct us in truth,

Even as You are truth.

Help us to guard our hearts

And to live with authenticity

As people of Your Word.