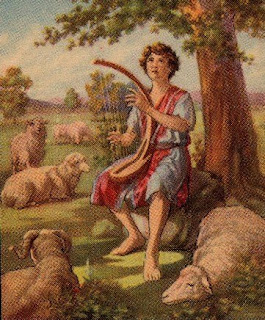 Illustrated by O. A. Stemler and Bess Bruce Cleaveland

God, in His omniscience, surely possesses vision for His children. Isn’t it amazing how the Lord can see so much more in us than we may ever dream possible?

David, son of Jesse, was a little brother to some serious soldiers. As his older siblings headed for war, their kid brother was left behind to watch the sheep. They probably even teased him as he sat on a rock, playing his harp for the flock. 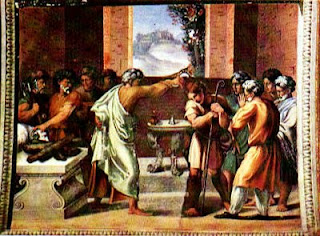 The Lord sent Samuel to the home of Jesse in Judah’s Bethlehem to anoint the next king of Israel. One by one, Jesse’s sons were paraded in front of the prophet. And one by one, six sons were rejected.

‘Are these all the sons you have?’

“’There is still the youngest,’

‘But he’s out in the fields watching the sheep and goats.’

‘We will not sit down to eat until he arrives.’”

Finally, the family fetched David, and Samuel anointed him. Immediately, the Spirit of God settled upon the boy in power, confirming the Lord’s choice. Clearly, He had a plan for this young man’s life.

“The Lord said to Samuel, ‘Do not consider his appearance or his height, for I have rejected him. The Lord does not look at the things man looks at. Man looks at the outward appearance, but the Lord looks at the heart.’" 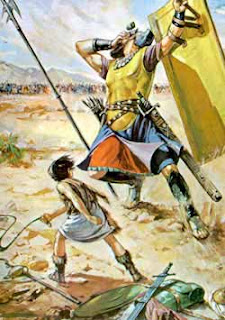 Having fallen from favor through disobedience, deceit and departure from the Lord’s guidance, King Saul experienced significant spiritual stress. One of the king’s servants suggested that the shepherd boy David might soothe him with lovely harp music. Soon, David joined Saul’s staff, gaining the king’s favor.

As the battle with the Philistines raged, the Israelites faced a terrible threat. The giant Goliath blasphemed against the Lord and His people. No man dared to fight the monstrous man, until David accepted the challenge.

Saul offered the boy his own armor, although it was much too big for the boy. Armed with the power of the Lord, David took only his slingshot and a handful of smooth stones. With one shot, he felled the giant.

Can anyone or anything stand against the power of God? Does the Lord not delight in confounding and confusing the wicked by employing the weak to topple the strong?

To belong to You.

To stand in Your power,

Covered in Your grace

And called as Your own.

Guard us from judging

For You see far deeper

That You have seen fit

Even before we desired