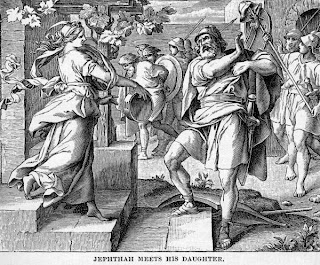 From The Story of the Bible, by Charles Foster

Throughout the time of the judges, the children of Israel zigzagged between obedience and disobedience to the Lord. They followed Him faithfully, and they faithlessly pursued pagan practices. The cycle continued for centuries.

Are we any different? How often do we cry out to the Lord in times of trouble, vowing to devote our lives to serving Him, only to stumble into outright sin or even complacency when times grow simpler?

Enslaved by the Ammonites

The Ammonites had oppressed the tribes of Benjamin, Ephraim and Judah. Several judges rose up and attempted to save the people of Israel. Tola and Jair, in particular, came and went.

Next, the Lord called an unlikely candidate, as He so often seems to do.

Jephthah was the son of Gilead and a prostitute. Although Gilead’s wife had borne him several sons, they did not possess the warrior skills of their illegitimate brother, whom they bitterly scorned. Jephthah departed and settled in the land of Tob, gathering a band of brave men with him (see Judges 11:1-3).

Isn’t it interesting how God often may call an individual out of his or her familiar surroundings to remove distractions and discord, so He may prepare that person for His service?

When the Ammonites turned up the heat on the Israelites, the sons of Gilead sought their warrior brother, whom they had earlier rejected. Jephthah’s brothers even promised to make him their leader, if he would rescue them from the advancing Ammonite army.

“Some time later, when the Ammonites made war on Israel,

the elders of Gilead went to get Jephthah

from the land of Tob.

‘be our commander, so we can fight the Ammonites.’

“Jephthah said to them,

‘Didn't you hate me and drive me from my father's house?

Why do you come to me now,

when you're in trouble?’

“The elders of Gilead said to him,

‘Nevertheless, we are turning to you now;

come with us to fight the Ammonites,

and you will be our head over all who live in Gilead.’

"Suppose you take me back to fight the Ammonites

and the Lord gives them to me –

will I really be your head?’

“The elders of Gilead replied,

‘The Lord is our witness;

we will certainly do as you say.’

“So Jephthah went with the elders of Gilead,

and the people made him head and commander over them.

And he repeated all his words before the Lord in Mizpah.”

How convicting it can be to consider how we may regard the Lord the same way. Will we seek Him only in desperate times, rejecting Him in seasons of plenty and peace?

“The stone which the builders rejected

has become the chief corner stone.”

Jephthah appeared before the Ammonite king, eloquently pleading the Israelites’ case. He traced the history and presented the facts with diplomacy and accuracy. Still, the king of Ammon refused to relent.

God filled Jephthah with the power and purpose of His Holy Spirit, equipping him for victory.

“Then the Lord’s Spirit took control of Jephthah,

and Jephthah went through Gilead and Manasseh,

Finally, he arrived at Mizpah in Gilead.”

One need not be Pentecostal to rejoice at this news. Surely, the Lord can fill any willing servant with His Holy Spirit, if that individual is available for His use.

Even a Spirit-filled believer, of course, can err. In his zeal for battle, Jephthah made an overenthusiastic vow unto the Lord. He promised to sacrifice whatever came out of his house first, upon his return from the battle victory.

What was Jephthah thinking? Whom did he expect to exit his home first? Was he willing to sacrifice a servant, a pet or what?

As it went, Jephthah’s own daughter was the one. Keeping his oath to God, he eventually sacrificed his only child.

Although we may be tempted to judge Jephthah’s rashness here, we might consider well the vows we make to the Lord. How do we try to beef up our most earnest prayers, by making enormous promises? Do we really intend to keep these? Do we somehow believe the Lord will be more likely to hear and honor our requests, if we present Him with unreasonable offerings? Do we honestly believe we have anything of worth to barter with the great God of the universe?

Perhaps this is a pride issue. Certainly, the Lord urges us to come to Him in humility alone. Surely, His grace is sufficient, and His love is enough.

“The sacrifices of God are a broken spirit,

a broken and a contrite heart.

These, O God, You will not despise.”

We confess that we have all too often

And service and selfishness.

And we seek Your face

We have nothing of worth

So we fall at Your feet,

Rejoicing in Your mercy and love.

Call us to worship,

In times of plenty,

As well as poverty.

Teach us to be consistent,

Even as You are ever faithful.

To belong to You.