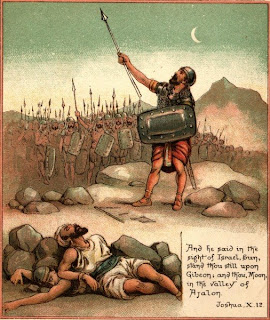 From The Coloured Picture Bible for Children

The Lord directed Joshua to lead the twelve tribes of Israel in conquest of Canaan, promising to go with His people in power and might. In fact, God assured them of triumph in His Name. Jehovah demonstrated his divinity, once again, with miracles, even after the leaders of the children of Israel failed to consult the Lord before swearing a treaty with one nation.

Fearing the God of the Hebrews, the people of Gibeon cooked up a scheme to con the Hebrews into a peace treaty. The Gibeonites had heard of the mighty deeds the Lord had done to ensure His people’s victory in battle at Jericho and Ai.

Without prayerfully considering their decision, Joshua and the other leaders were taken in. They took an oath with the leaders of Gibeon, not realizing these people dwelt in the line of conquest. Soon, neighboring kings banded together to attack the Gibeonites, hoping to lure the Hebrews into battle.

Joshua marshaled the forces to defend the Gibeonites, as promised. And the Lord stepped into the fray, sending hailstones to vanquish the enemy armies, even as they fled down the steep Beth-Horon Pass from the Hebrew army.

“And while these troops were going down through Beth-Horon Pass,

the Lord made huge hailstones fall on them

all the way to Azekah.

More of the enemy soldiers died from the hail

than from the Israelite weapons.”

Surely, once again, the battle and the victory belonged to the Lord.

What battles do you face today? Where do you need God to step in victoriously?

After the battle for Gibeon, Jehovah demonstrated His might again, stopping the sun in the middle of the sky, while His people defeated the Amorite armies.

“On the day the Lord gave the Israelites victory over the Amorites,

Joshua prayed to the Lord

in front of all the people of Israel.

He said, ‘Let the sun stand still over Gibeon,

and the moon over the valley of Aijalon.’

So the sun stood still and the moon stayed in place

until the nation of Israel had defeated its enemies.”

What bold faith Joshua exercised in front of the children of Israel. Truly, he put his convictions on the line, making his petition so public. Joshua knew, by faith, that the Lord would answer his prayer.

How might we model greater faith, as we pray for the Lord’s victory in our own lives and the lives of those we love? What testimonies might be possible, if we would be willing to step up and petition the Lord publicly?

A testimony in a nutshell

Here’s a personal example of this. Not long ago, I underwent some rather scary medical testing. Doctors began tossing terrible terms around as potential diagnoses. At first, I chose to keep the matter in confidence, praying only with a few very close friends and family members.

Weeks passed, as I awaited healing, or even a definite diagnosis.

In time, the Lord began to reveal to me that His glory would be greater in His answer, if I were willing to share the matter with others. If others helped to carry the matter to the Lord in prayer, then they would also share in the joy of the eventual good report.

Why do we hesitate to pray publicly for real needs?

We find it fairly easy to pray publicly for intangible things. We can ask the Lord to bless someone. We can petition or intercede generally for health, prosperity or even spiritual growth. However, can we be just as bold in asking the Lord to act in demonstrative and measurable ways?

Of what are we afraid? Have we any doubt that the Lord may not hear our prayer, or that He may be unable to answer? Do we fear for our own reputations, if the Lord should choose to act otherwise? Are we worried about the Lord’s own credibility? Does the Lord need us to guard His honor? Surely, He does not.

Was Joshua a symbolic archetype of One to come?

Joshua, the Lord’s chosen leader for the conquest of Canaan, came from the tribe of Ephraim (one of the sons of Joseph). Joshua’s name, in Hebrew, meant “The Lord is Salvation.” Interestingly, some 1,400 years later, another Leader would eventually arise in Israel with a similar name.

Even as Joshua, the mighty warrior, led the people to triumph in the power of the Lord, Yeshua would achieve victory in God’s name.

To God be the glory.

Teach us to pray

With faith and boldness,

So that You may be glorified

May the nations see

What You have done

Be turned to You.