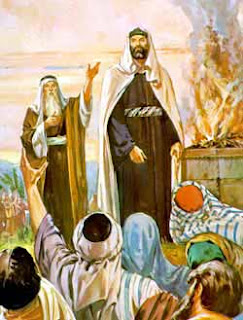 If King Saul was the Lord’s choice and the anointed king of Israel, why did he display such rashness during his reign? Did someone make a mistake here? Does the Lord appoint fallible individuals to leadership? Would anyone be eligible, if He did not?

Perhaps it is pride. Possibly it is simple presumption. Either way, Saul displays a series of hasty actions that lead him down a destructive path, rather than the road of faithfulness to the Lord.

As the men of Israel prepared to do battle with the Philistine armies, Saul waited for the prophet Samuel to arrive at the camp in Bethel’s hill country to offer a sacrifice to the Lord. Surely, God’s people would need His favor for the fight. Still, Samuel was late in coming, so Saul took matters into his own hands and made the burnt offering himself.

Just then, the prophet showed up and rebuked King Saul for overstepping his God-appointed boundaries. The king’s presumptuous act brought judgment upon him and the people. In addition, Samuel declared that the Lord would end the rule of Saul and give the leadership of His people to a faithful one, whose royal lineage would endure. (In fact, the legacy of King David’s line would lead even to the Savior, Jesus Christ.)

How often does pride cause leaders or others to overstep the authority we may have been granted, even as Saul did, in our own haste or haughtiness? Will we deign to usurp ungranted power, simply to accomplish a longer list of tasks in a shorter time period, rather than waiting on the Lord’s leading? 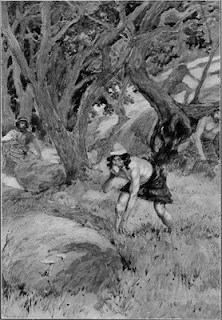 After God miraculously delivered the Philistines into the hands of the Israelites, beginning with a heroic series of events involving Saul’s valiant son Jonathan, the battle ensued. In the heat of the conflict, King Saul declared an oath, promising that any man who stopped to eat before nightfall would be killed. Surely, Saul’s exuberance for the fight overtook his common sense.

Not knowing about his father’s rash vow, Jonathan nibbled on some honey, which he found on the floor of the forest. In the end, after the battle’s end, Saul and the people of Israel discovered what Jonathan had done.

Would Saul put his own son to death?

Fortunately, the men of Israel intervened to rescue Jonathan. Even so, Saul’s own integrity and his kingly discernment had come into question.

How seriously do we consider the promises we make? Will we swear oaths upon impulse, only to regret them later? How difficult can it be for us to be people of our word?

Would we rather be people of our word, or people of God’s Word?

You are King of Kings,

And Ruler of the universe.

Rather than our own.

Call us into Your purpose,

And direct our steps.

We are unable to keep.

Make us people of the Word,

May we honor You

And give You all the glory.