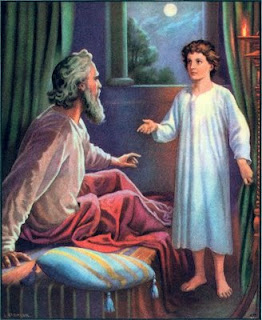 Samuel Tells Eli He Has Heard Him Calling

Does the Lord ever stop speaking to His people? Would He withhold direct communication and remain silent and withdrawn for entire eras? If the Lord created mankind for fellowship with Himself, what would cause Him to desire to be distant? Is this even possible?

A Rarity of Revelation

As the Lord prepared to call Samuel into His service, the Word of God presented a significant statement:

“Now in those days

messages from the Lord were very rare,

and visions were quite uncommon.”

How often have we made similar assessments, throughout certain eras in the history of the church? How we love to recount stories of glory days gone by, when the Lord manifested His glorious Presence among us with signs and wonders. We mourn the passing of such eras of power. Why do we not eagerly anticipate the Lord’s appearance even today? Is this not an issue of faith?

Listening for the Lord

As the young Samuel served in the Lord’s Temple, he heard a voice calling him from his slumber. At first, the boy assumed Eli, his priest and mentor, was summoning him. By the third call, accompanied by Eli’s admonition, Samuel recognized that the Lord Himself was speaking to him. He responded with willingness and humility.

“And the Lord came and called as before,

‘Speak, Your servant is listening.’”

Perhaps the attitude Samuel adopted is a key to an individual’s ability to hear directly from God.

If the Lord should choose to call us, will we recognize His voice?

God surely called Samuel, anointing and equipping him as a prophet.

“The Lord was with Samuel as he grew up,

and He let none of his words fall to the ground.”

What a powerful statement. Every word Samuel spoke was strong and effective, and the people of God heeded his words, knowing this prophet spoke for the Lord.

How might we choose our own words, if we truly believed we spoke for God? What might our relationships look like, if everything we said actually counted, and none of our words fell to the ground?

Anguish and the Ark

Although the Lord provided His people with an effective prophet in Samuel, they still sought power and victory in battle from the Ark of God, rather than God Himself. Carrying the Ark from Shiloh, where it belonged, they took it into a conflict with the pagan Philistines. The enemy captured the Ark of the Lord and carted it off to their own cities.

The results were disastrous, both for the Israelites and the Philistines. As prophesied, Eli’s sons Hophni and Phineas were killed in battle in a single day, and Eli himself fell dead as well.

Possession of the Ark of the Covenant brought trouble, rather than triumph, to the Philistines. They placed the Ark in their temple to their idol Dagon at Ashdod. Overnight, Dagon’s idol was toppled face-down on the floor. The second morning, Dagon’s idol was found, face down again, but with his head and hands broken off. Certainly, the Lord had demonstrated the falseness and frailty of idolatry.

Terrified, the Philistines began passing the Ark from city to city. In each location, panic and disorder and disaster ensued. Eventually, the Ark was miraculously returned to the Israelites. When the Lord’s people finally restored the Ark of the Covenant to its proper place, along with a proper sacrifice and Samuel’s earnest intercession for the people, the Lord granted them peace.

What a difference true obedience can make in an unhindered relationship with God. How closely connected are proper worship and peaceful living. 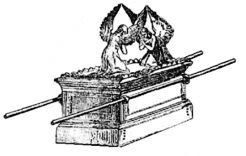 Ark of the Covenant

How we desire to hear from You.

Teach us to listen,

To heed Your call

And to worship You

In spirit and in truth.

But may we also

Look for the many ways

You work in our lives today.

For You are the one true God,