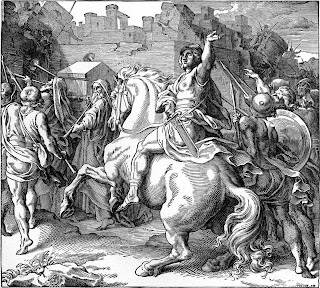 From Treasures of the Bible by Henry Davenport Northrop
International Publishing Company, 1894

The Lord promised to deliver the city of Jericho into the possession of the children of Israel, led by His servant Joshua. However, the people of Jericho saw them coming, and they closed the city gates and fortified their walls.

The walls of Jericho were so wide and sturdy that Bible scholars have claimed the armies of the city actually drove their chariots atop the fortresses.

A plan with purpose

The Lord commanded Joshua to instruct the priests to march around the city of Jericho, carrying the Ark of the Covenant, for seven days. Trumpeters accompanied the Ark, along with the army. On the seventh day, they looped the city of Jericho seven times. Then Joshua told the people to shout.

And the walls fell.

God may have commanded His angels to topple the wall. Perhaps He sent an earthquake. Maybe the Lord simply spoke the order, and the walls tumbled.

Archaeologists have uncovered evidence of the fall of Jericho’s wall, along with artifacts indicating a massive fire took place upon that site. One section of the wall, located along the north side of the ancient city’s location, apparently remained unharmed. Scholars believe this was the site of Rahab’s house.

Following God’s specific orders, they slaughtered all of the inhabitants of the city (except Rahab and her household, as promised). They burned Jericho to the ground, destroying all of its contents. Only precious metal objects were saved, as these were added to the treasury of the tabernacle.

Achan, however, chose to take a few valuables from the bounty of Jericho. He hid them, by burying the items in the dirt below his tent. The Lord saw, and the consequences were steep for His people until the evil was discovered and removed. 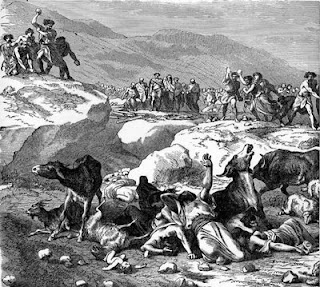 The Stoning of Achan

From Treasures of the Bible by Henry Davenport Northrop
International Publishing Company, 1894

God commanded His people to consecration, distancing themselves from the possessions and practices of the pagan cultures around them. They had to deal swiftly and seriously with the evil among them. Only then would they experience His victory.

Even with the seed of sin among them, God’s people never stopped being His people. However, they lost His hand of protection while the evil remained in their midst.

Can the Lord ignore deeds of deception and disobedience?

Certainly, our great God is filled with mercy and grace. He longs to renew our lives, and He has already redeemed us for eternity.

At the same time, how fearsome it is to consider that we may be blocking our own triumph in the Lord by harboring items and issues of unrighteousness among us. What consequences might we face in our own times by allowing sin to creep into our camp?

“For there is nothing hidden

that will not be disclosed,

that will not be known or brought out into the open.”

Perhaps we ought to examine our culture, our community, our churches and our own hearts. What secrets might we be trying to hide from the Lord and from ourselves? Whom do we think we are kidding?

What walls do we need the Lord to bring down in our own lives?

What obstacles are we facing? Are we willing to reveal and remove any hidden evil secrets, so that we can freely shout the Lord’s glory?

God instructed Joshua many times to be strong and have no fear. In truth, it can take a lot of courage to confront the sin in our own hearts and allow the Lord to deal with it.

Surely, the victory is worth it.

As we ponder these questions, here is a link to a classic Gospel number, “Joshua Fit the Battle of Jericho,” sung by Mahalia Jackson:

We need Your victory

In our own lives today.

Shine Your light into our hearts,

And show us any secrets

We may have tried to hide

And even from ourselves.

Call us to confession,

So we may stand consecrated

In Your great grace.

Has already been won.

May we be humbled enough