A Pair of Parental Profiles 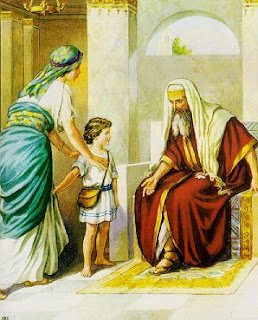 Hannah Presents Samuel at the Temple for Service

From The Illustrated King James Bible

Does a parent’s devotion to God guarantee that his or her children will also commit themselves to Him fully? If parents are faithful to the Lord, demonstrating devout belief, irrefutable moral conduct and a lifetime of service to God, will their children automatically grow up to do the same?

Today’s Bible reading offers two very different testimonies, both involving faithful parents with high standards of faith, authenticity and devotion to the Lord. Their children, however, turned out very differently.

A Parent’s Plea and Promise

Hannah, wife of Elkanah (of Ephraim), was barren. She pleaded with the Lord for a pregnancy. Although her husband declared and demonstrated his love for Hannah, she mourned the fact that her womb was closed.

Her husband had two wives. Peninnah, Elkanah’s other wife, enjoyed several children and taunted Hannah mercilessly for it.

Any woman who has ever struggled with infertility has experienced the pain Hannah felt. Imagine her sorrow, living in a household filled with babies and growing children and desperately wanting her own. In all likelihood, Hannah even helped to care for her rival’s offspring.

Faithfully, Hannah took her sorrow to the Lord. At the temple at Shiloh, she poured her heart out to the Lord (see 1 Samuel 1:12-16). Her earnest petition was so intense that the priest, Eli, rebuked her for apparent drunkenness. (Pentecostals may find Hannah’s prayer pose somewhat prophetic, as she prayed passed her own understanding.)

Hannah prayed an oath before the Lord. She promised, if the Lord would grant her a son, that he would be bound by the Nazirite vow, even before his birth. Surely, Hannah would dedicate such a son to the Lord’s service.

Eli, the priest, blessed Hannah and affirmed that the Lord would answer her prayer. And He did.

Hannah proved faithful. She named her promised son Samuel and offered him to the Lord’s work at the temple at Shiloh. Each year, she stitched sacred garments for the boy and delivered them to him when she and her family journeyed to Shiloh for the annual temple sacrifices. 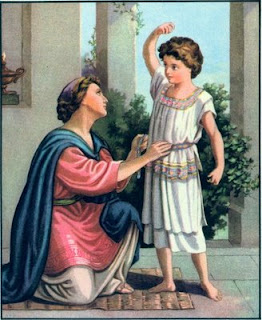 Hannah's Mother Brought Him New Clothes Each Year at the Temple

The Lord honored Hannah for her faithfulness, granting her additional children (see 1 Samuel 2:18-21). And Samuel grew up in the faith, serving the Lord with devotion and complete commitment.

was growing in stature and in favor

both with the Lord and with men.”

What more could a parent ask, than that his or her child would follow the path the Lord had chosen? The Bible’s brief description of Samuel’s development foreshadows the childhood of One to come. Consider the Scriptural shorthand account of the Lord’s own earthly youth:

kept increasing in wisdom and stature,

and in favor with God and men.”

During the same timeframe, another faithful parent struggled greatly with his own offspring.

A Priest’s Own Prodigals

Eli’s own sons were creating havoc at Shiloh, even while they served at the temple. Hophni and Phineas robbed from the Lord by taking sacrificial meats before the Lord’s own portion had been consumed in the altar fire. (see 1 Samuel 2:12-17). The two young men committed sexual sins with the women serving at the temple (see 1 Samuel 2:22). 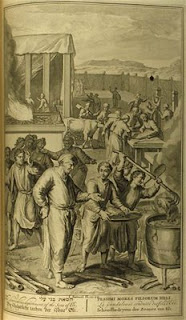 "’Why are you doing these awful things?’

‘I've been hearing nothing but complaints about you

from all of the Lord's people.

If you harm another person,

God can help make things right between the two of you.

But if you commit a crime against the Lord,

Hophni and Phineas refused to heed their father’s words and repent.

The Lord sent a prophet to Eli, declaring His judgment upon his household. Surely, Hophni and Phineas would die, even on the same day. And the family legacy of faith would be cut off.


What did Eli do wrong, as a parent? How many teachings have we heard or read that point blame directly at Eli for his sons’ transgressions? Why do we hear nothing about the boys’ mother? Are these parents responsible for the paths their errant sons chose?

How tempted we may be to berate Eli for apparent parental shortcomings or misdeeds. Did the priest spend too much time at the temple, in the Lord’s own service, to the neglect of his family? His sons actually served at the temple with him, so Eli clearly spent plenty of so-called quality time with the lads. Certainly, the boys received sufficient teaching on the things of the Lord. They surely witnessed the work of God, while working daily among His people.

Surely, parents carry considerable responsibility for guiding and influencing future generations. Of course, the Lord instructs us to join Him in building a legacy of faith in our families. At the same time, is it possible for faithful parents to produce faithless offspring, even if those parents serve the Lord wholeheartedly and consistently?

Will we bear the blame ourselves, or attempt to build a burden of blame upon others, for children or young adults who refuse to follow their parents’ leading into a legacy of faith?

Perhaps our focus ought to include more mercy and greater grace, driving us to pray for prodigals. Is it possible that the Lord has not finished His work in our families?

May His loving-kindness extend even to many more generations among those we love.

Only You are the perfect parent.

How we long for those we love

And to live under

Your hand of blessing.

The legacy You desire

For the eternal outcome.

And the lives of those we love

Are in Your loving hands.