March 19th - From Fear to Faith

From Fear to Faith 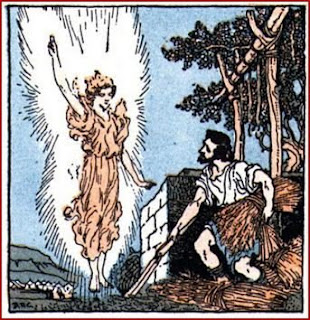 Gideon in the Winepress

“Again the Israelites did evil in the eyes of the Lord,

and for seven years

He gave them into the hands of the Midianites.”

In the late 12th Century B.C., the tribes of Ephraim and Manasseh were oppressed by the Midianites. The Midianites stole their crops and their land and drove the two tribes out. The Israelite families lived in hiding in caves by the Jordan River. Finally, the people cried out to the Lord for deliverance.

Gideon, son of Joash, was threshing wheat in a winepress. Traditionally, ancient people threshed wheat by tossing it up into the open air, so that the worthless chaff would blow away, leaving the useful grain remaining. However, for fear of a Midianite attack, Gideon performed this task in a sheltered spot, standing down inside a winepress.

Surely, this seemed inefficient, but Gideon feared for his livelihood and perhaps his life.

How might we hinder ourselves through fear, hiding from hazards that may or may not seek to harm us?

“For God has not given us a spirit of fear,

but of power and of love

and of a sound mind.”

Suddenly, the angel of the Lord greeted Gideon.

“When the angel of the Lord appeared to Gideon,

he said, ‘The Lord is with you, mighty warrior.’"

At this point, Gideon had to be wondering what the Lord saw in him that he may have missed, as he hid in the winepress. The angel called him a mighty warrior of God.

How might we respond, if the Lord called us such?

Gideon asked for a sign, requesting that the angel remain until he returned with an offering. The angel complied, staying until Gideon brought a sacrificial goat and grain. The angel lit the offering with a consuming fire before departing.

Jehovah Shalom – The Lord is Peace

Emboldened by his encounter with the Lord’s angel, Gideon build an altar on the spot, calling it Jehovah Shalom (The Lord is peace.).

At the Lord’s command, Gideon tore down his own father’s idolatrous altars, using their wood to sacrifice a bull to the Lord. The local leaders threatened him, but his father defended his cause.

Gideon was filled with the Spirit of the Lord, as God prepared him to lead the people into battle against the Midianites, Amalekites and other pagan peoples.

“But the Spirit of the Lord

clothed Gideon with Himself

and took possession of him,

and he blew a trumpet,

and [the clan of] Abiezer was gathered to him.”

What a change a total Spirit-infilling can make!

After calling the people of Manasseh to prepare for battle, along with the neighboring tribes of Asher, Naphtali and Zebulun, Gideon sought additional confirmation from the Lord. He performed his famous fleece test. The first night, God soaked Gideon’s piece of fleece with morning dew, while keeping the ground around it dry. The next night, He soaked the ground with dew, keeping Gideon’s fleece completely dry.

At this point, the Lord told Gideon to whittle the fighting forces, so that only the most faithful remained. Of 32,000 soldiers, 22,000 were sent home.

But that was not enough. God instructed Gideon to observe the men drinking water from the river and send the careful slurpers home. That left just 300 men to face the battle.

Overnight, The Lord gave Gideon a prophetic dream of victory.

Trumpets and torches herald the victory.

The 300 men carried trumpets and torches in glass jars to the enemy camp. At Gideon’s command, they broke the jars and blew the trumpets. The enemy forces fled, attacking one another as they ran.

The armies of Israel did not lift a sword. They did, however, lift high their lamps and sound their trumpets to proclaim the power of the Lord. And the Lord prevailed victoriously for His people.

To what victory does the Lord call you today? Are you ready to raise your eyes towards Heaven and sound His praises, as His power brings triumph in your life? 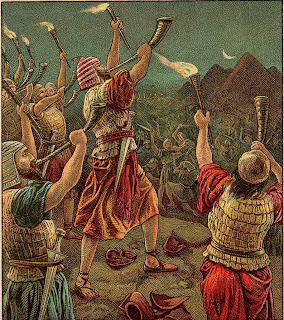 Gideon and His Three Hundred

You are our peace.

You are the Mighty One.

Who could stand against You?

Fill us with Your Spirit,

As we offer You praises.

Teach us to trust You.

Call us for Your cause,