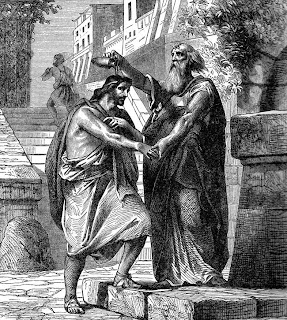 Saul Is Anointed by Samuel

How the pendulum of prudence swings back and forth, throughout the Bible and in our own lives.

Today’s Bible reading announces the Israelites' desire for a king, so that they might be like other nations surrounding them. What is so great about emulating the behavior of others?

The Lord Himself had promised to lead and direct His people. However, as the threat of conflict with neighboring nations loomed, the people desired a more tangible solution. After all, the prophet and judge Samuel was growing older. His own sons, though serving as judges of Israel, had rebelled against the Lord’s ways.

he appointed his sons as judges for Israel.

The name of his firstborn was Joel,

and the name of his second was Abijah,

and they served at Beersheba.

But his sons did not walk in his ways.

They turned aside after dishonest gain

and accepted bribes and perverted justice.

“So all the elders of Israel gathered together

and came to Samuel at Ramah.

They said to him,

and your sons do not walk in your ways;

now appoint a king to lead us,

such as all the other nations have.’"

Counting the Cost of a King

Samuel warned the people of Israel of the certain consequences of crowning a king. Conscription, taxation and other costs would apply, as such a ruler set up his government (see 1 Samuel 8:10-18). Still, the Israelites demanded a ruler.

God, in His omniscience and omnipotence, confirmed this plan and instructed Samuel about the selection of the first king of Israel. The Lord appointed Saul, working out a plan whereby Samuel would identify him. Saul’s family’s donkeys were lost, and God revealed to Samuel how the animals would be found and Saul anointed as king (see 1 Samuel 9).

The Prophet Anoints the King

Samuel shared the Lord’s Word with Saul, anointing him with oil to mark him as the chosen monarch of Israel and speaking prophetic words over him.

As Samuel had prophesied, Saul became filled with the Holy Spirit of God, and his heart was changed. The people who knew him marveled. (see 1 Samuel 10:9-13), although others questioned his kingship.

When we petition the Lord for a real or perceived need, how often do we question the answer He may provide? Are we ready and willing to recognize His answer when it arrives?

The Lord allowed the Ammonites to go up against the Israelites in battle at Jabesh-Gilead. After God empowered Saul to lead His people to victory, the people confirmed his reign with a celebration (see 1 Samuel 11:12-15).

How might the Lord be leading us to triumph in our own daily struggles? Can we find occasion for celebration of His mercy and might?

After the Lord had sealed His people’s triumph over the Ammonites, Samuel delivered his final testimony before them. He defended his own integrity and faithfulness before the Lord, testifying to the Lord’s protection and providence throughout the ages. Samuel rebuked the people for their discontentment with the Lord’s own kingship. At the same time, he affirmed the people’s, exhorting them to trust the Lord for their deliverance and daily provision.

and see this great thing

the Lord is about to do before your eyes!

Is it not wheat harvest now?

I will call upon the Lord to send thunder and rain.

And you will realize what an evil thing

you did in the eyes of the Lord

when you asked for a king.’

“Then Samuel called upon the Lord,

and that same day the Lord sent thunder and rain.

So all the people stood in awe of the Lord and of Samuel.”

The Lord honored the prayer of Samuel, His faithful servant, demonstrating His glory before His people again. For His own sake, He remained steadfast in His love and mercy for those He loved.

How blessed we are that our great God never stops loving us, even when we question His judgment, complain of His provisions, rebel against His instructions or even ignore His gentle leadings in our lives. His loving-kindness is everlasting.

May we seek to honor Him with our whole hearts.

And Lord of love,

How we praise You.

You know what we need

Far more than we may ever understand.

And to rest in Your love

For You are great.