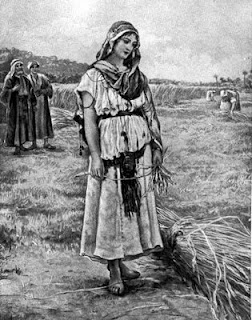 From Treasures of the Bible

The story of Ruth is a familiar and favorite account in Scripture. Ruth, a Moabitess, lost her husband. Her mother-in-law, Naomi, and her sister-in-law, Orpha, lost their husbands as well. What a tragic turn of events, all occurring with a single decade.

The family was living in Moab, having relocated from Bethlehem in Judah to avoid a famine. After the deaths, however, the famine had ended. The widow Naomi planned to return to her homeland. She released her two Moabite daughters-in-law to remain in Moab.

At this point, Ruth displayed her loyalty, vowing to stick with Naomi.

‘Intreat me not to leave thee,

or to return from following after thee:

for whither thou goest, I will go;

and where thou lodgest, I will lodge:

thy people shall be my people, and thy God my God:

Where thou diest, will I die, and there will I be buried:

the Lord do so to me, and more also,

if ought but death part thee and me.’”

Interestingly, Ruth’s wording seemed to echo the covenantal promises of the Old Testament Hebrew people, such as David and Jonathan (see 1 Samuel 10).

What a wonderful example of family devotion.

Settling in Bethlehem with Naomi, Ruth set off to glean in local fields. Gleaning was a commonly accepted practice, in which needy folks would follow behind the actual harvesters to pick up any leftover grain remnants they left behind.

By the Lord’s providence, Ruth unwittingly happened to glean in the fields of Boaz, who was a distant relative of her late father-in-law and her husband. Once Boaz realized who Ruth was, he instructed his field workers to leave extra grain behind for her.

Eventually, a full-fledged Bible love story developed, leading through generations to the greatest love story ever told, the birth of Yeshua, the Messiah.

Lineage of the Lord

Hebraic tradition provided for levirate marriage, providing for childless widows to continue their family lineages. In Ruth’s case, even though she was a foreigner, the Lord planned for Boaz to become her kinsman-redeemer.

Boaz married Ruth, and she became the mother of Obed. Obed was the father of Jesse and the grandfather of King David of Israel. And the Savior of the world, Jesus Christ, came from this same family tree, born in Bethlehem, the City of David.

Surely, our great God transformed a widow’s woes into a legacy of love that would last forever.

Ruth’s story offers a wonderful prophetic picture of Jehovah Jireh, the Provider, and His powerful plan of redemption for the world. Certainly, we were all foreigners, lost and sorrowing, before He sought us and bought us from ourselves and our sins. The Lord has changed our nationality and our name, making us citizens of Heaven and part of His own clan.

“So then you are no longer strangers and aliens,

but you are fellow citizens with the saints,

and are of God's household.”

In Christ, we have become God’s own children, forever belonging in the family of the Lord.

“For all who are being led by the Spirit of God,

these are sons of God.

For you have not received a spirit of slavery

but you have received a spirit of adoption as sons

by which we cry out,

“The Spirit Himself testifies with our spirit

that we are children of God,

and if children, heirs also, heirs of God

and fellow heirs with Christ,

if indeed we suffer with Him

so that we may also be glorified with Him.”

Hallelujah! What a holy heritage.

Lord, You amaze us

With Your great love

And Your wondrous plan

Our merciful Kinsman and Redeemer,

You have brought us back

Into Your forever family

Through Christ our Lord.

May we thank You

With our whole hearts,

For we belong to You.