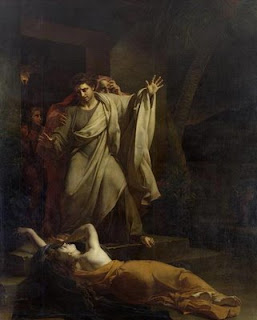 The Levite of Ephraim

As the book of Judges draws to a close, we find schemings and strife, rioting and rationalizations, civil unrest and certain distress. Certainly, these centuries (approximately 1380 to 1043 B.C.) represented a low point in the Israelites’ spiritual and moral journey. And yet, the Lord never abandoned His people.

Today’s Bible readings open with a sad story about a Levite from the hill country of Ephraim and his concubine.

The Custom of Concubines

In Old Testament times, a concubine was a female companion, who lived in a man’s household without being his wife. A concubine held a lower social status than a wife. A concubine, for instance, could not inherit any portion of a man’s estate. However, her children would be regarded legal heirs of their father.

The Levite and His Lover

The Levite, living in a remote region of Ephraim, found a concubine in Judah’s Bethlehem and took her into his home. Apparently, the Levite’s concubine was unfaithful to him (see Judges 19:1-2), and she returned to her father’s house. Intriguingly, the Levite waited four months before traveling to retrieve his concubine.

The concubine’s father stalled for several days, feigning hospitality, before bidding his daughter and the Levite farewell.

As the Levite and his concubine journeyed homeward, they stopped at Gibeah (in the region of Benjamin) for the night. With no place to stay, they rested in the town square, until an older man offered them lodging in his own home.

That night, several Benjamite men of Gibeah harassed the old man, pounding on his door and making lewd suggestions regarding the Levite. The Levite sent his own concubine out to satisfy the men’s evil desires.

Perhaps he was still bitter about her unfaithfulness to him. Maybe he counted his concubine’s life as less worthy than his own. Somehow, the Levite rationalized his actions.

The next morning, he discovered his concubine, dead at the door of his host’s house. He placed her body on his donkey and headed for his home in Ephraim. There, he cut his concubine’s body into twelve portions and sent one to each of the tribes of Israel.

The result was an all-out civil war.

Eleven of Israel’s tribes mustered their troops to punish the tribe of Benjamin for the shameful situation. They confronted the leaders of Benjamin, who refused to surrender the evildoers from Gibeah.

Battles ensued. Although the Israelites sought the Lord’s guidance in the battle, their discernment may have been clouded by their zeal for vengeance. Twice the Benjamites slaughtered their brethren from the other tribes. In the third skirmish, the Benjamites themselves were defeated.

The casualties were substantial on all sides. What a terrible price pay for a saga of sin.

The men of the eleven tribes vowed that they would never allow their daughters to marry men of Benjamin’s tribe again.

Before long, considering the casualties and the potential loss of Benjamin’s legacy, the Israelites mourned this oath. Assuring themselves of the worthiness of their solution, in a most Machiavellian manner (although millennia before that phrase was coined), the Israelites cooked up a plan to ensure Benjamin’s progeny.

The Israelites attacked the people of Jabesh Gilead, killing all except the virgin women. These they gave to the men of Benjamin (see Judges 21:13-15). Still, several Benjamite men went without mates.

With the first plot falling short, the Israelites devised another scheme. This time, they offered the Benjamites the dancing girls of Shiloh. (Located in the hill country of Ephraim, Shiloh was Israel’s spiritual capital city at the time.) The Benjamites actually captured the maidens of this city, by hiding in the vineyards until the young ladies came out to dance. Seizing the damsels, the men of Benjamin carried them off.

Their fathers justified this, by claiming they had not broken the vow against allowing their daughters to marry into the tribe of Benjamin. After all, their daughters had been captured, rather than betrothed.

Did the Israelites really believe that God could be deceived? Do we?

Benjamites Win Themselves Wives from the Dancing Daughters of Shiloh

By Master of Otto Van Moerdrecht

The book of Judges, and this morally questionable period in the history of God’s people, is surely summed up by the book’s final statement:

“In those days Israel had no king;

all the people did whatever seemed right

in their own eyes.”

Does this sound all that different from our own times? What questionable actions and morally dangerous attitudes do we rationalize – as individuals and even nationally?

What a comfort we may derive from the truth of God’s mercy. For even when we are unfaithful, he cannot be other than faithful.

That You remain faithful,

No matter what we may do,

You are evermore the same.

Where we have rationalized,

So we may return

We long to love You