The Tribes of Israel

Having conquered Canaan in the power of the Lord, Joshua and the leaders of the twelve tribe of Israel divided the land among the clans. Casting lots, the land was allotted to the tribes who had not already received their territories.

In earlier Bible readings, we learned that Moses had already assigned lands (east of the Jordan River) to the tribes of Dan and Reuben and half of Manasseh’s tribe. This was accomplished before the attack on Jericho. 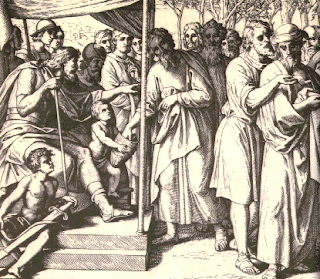 From Bibel in Bildern

As each of the remaining tribes receives its share of the Promised Land of Canaan, we may find it interesting to note the repeated references to the Levites. This priestly tribe receives no territory. Instead, the Levites are offered towns and pasturelands, so that they may provide for their families and their flocks (see Joshua 14:4-5).

Why do the Levites receive no territories?

God’s Word is clear on this issue.

“But to the tribe of Levi

he gave no inheritance,

since the offerings made by fire to the Lord,

the God of Israel, are their inheritance,

as He promised them.”

The priestly calling of the tribe of Levi was to serve the Lord, unhindered by the responsibilities and concerns of property ownership. The Lord intended His service to be inheritance enough for these chosen few.

“But to the tribe of Levi,

Moses had given no inheritance;

the Lord, the God of Israel,

as He promised them.”

Surely, God Himself desired to be the sufficient inheritance of the Levites.

The Lord calls all believers to be His priests.

In the Old Testament, the priests were responsible for making offerings and sacrifices to the Lord, leading worship and sacred proceedings, carrying the Ark of the Covenant into battle and instructing the people in God’s Word.

Ever since the once, forever and final atoning sacrifice of Jesus Christ, the Messiah of the world and the Holy Lamb of God, no further priestly sacrifices need be made. The Savior has completed the eternal work of God. The battle has been won.

And the Lord has ordained His own people to be His priests, carrying the Lord’s banner of love into battle for the glory of His Name and leading others to know Him and to worship Him forever. Hallelujah to the Lord.

“But you are a chosen people,

a people belonging to God,

that you may declare the praises of Him

who called you out of darkness

into His wonderful light.”

God of wonder and glory,

How we praise You

For who You are.

All we need is you.

Give us a greater glimpse

That we may desire

Is more than enough.