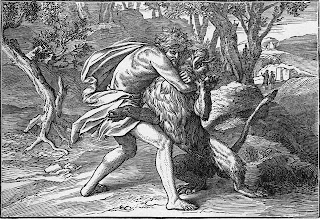 From Religion in the Home or Captivating Bible Stories

Samson the strongman of Israel is the subject of today’s Bible readings. This judge, born with a Nazirite vow, came from the tribe of Dan. Even before his birth, the Lord marked Samson, the son of Manoah of Zorah, for a miraculous calling.

Like so many special mothers in the Bible (including Sarah, Hannah and Elizabeth), Samson’s mother suffered many years of childlessness. Finally, the Lord’s own angel visited her with an exciting personal message.

Manoah’s wife would bear a son. The angel instructed her to abstain from alcohol and unclean foods throughout the pregnancy (see Judges 13:2-5).

Surely, this child would be special and set apart for the Lord.

The angel reappeared, this time speaking with both Manoah and his wife. They tried to offer him a young goat, as a sacrificial meal, but the angel refused to eat. This affirmed the eternal truth that sacrificial offerings belong only to the Lord God Himself.

Still, the strongman possessed a dangerous weakness. His passion for pagan women proved to be his downfall, time and again.

First, he lost his temper when his pagan wife shared the answer to his lion and honey riddle with his wedding guests. After he killed the men of Ashkelon, his bride’s father gave her to another man in marriage (see Judges 14:18-20).

Next, Samson gave in to the false allure of a prostitute in Gaza. In the night, the people surrounded him to attack and kill him. Arising at midnight, Samson tore up the city gate and escaped (see Judges 16:1-3). 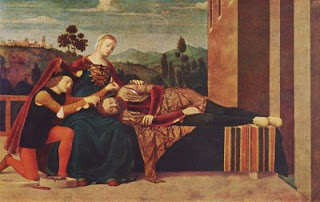 The Philistines finally wised up to Samson’s weakness, convincing the lovely Delilah to seduce the strongman into divulging the secret of his strength.

Samson held out, giving false leads three times. Finally, Delilah managed to nag the strongman into spilling the truth about his might. Samson confessed his Nazirite vow and the secret of his hair. If his hair were to be cut, his Nazirite vow would be broken, along with his amazing physical strength, which came from the Lord’s own power.

Delilah lulled her lover to sleep, and Samson’s seven braids were cut. The Philistines were able to restrain him, and they blinded him as well. Quite literally, the mighty man lost his vigor and his vision overnight.

The Philistines paraded their prisoner for their own entertainment, as they were gathered to worship their false god.

Tied in the temple, Samson sought the Lord’s power one last time, pulling the pillars from their bases and tearing the entire structure to the ground. All of the Philistine leaders, along with thousands of spectators, were crushed and killed in the rubble.

Although Samson the strongman was a historical figure, a real flesh-and-bone human that God used to lead His people for two decades, he also provided a prophetic picture of One yet to come, who would lead the Lord’s children forever.

Toppling the pagan temple and destroying the enemies of the Lord’s own people, Samson foreshadowed a long awaited Deliverer. However, this One would not possess any flaw of character. The Savior to come would possess both strength and sinlessness, a true Superhero. His power would not rest in his hair, but in his heart, the very heart of the living God.

And life comes from You.

To be set apart

And to depend upon You daily,

For You are the Source

Reveal our weakness to us today,

That we may offer it to You

And trust You even more.

For we can do nothing

Our Lord and God.