God is funny. C’mon, you know it’s true.
I love God for so many reasons. He is holy, loving, mighty, all-wise and beyond compare. He’s also positively hilarious. I am convinced that the Lord God has the greatest sense of humor of all.

Seriously, have you taken a look around at some of the amusing situations His children get into?

Can’t you just see the Heavenly Father, chuckling fondly over the antics of His children, like you and me?

I can picture the adoring Adonai, nudging an angel and remarking with a godly grin, “Hey, look at my daughter, tripping over her own words. Isn’t she adorable?”

Or He might poke Jesus and say, “Aha! Did you see that hotshot there? That’s cute. He thinks he’s building that tower on his own. How long shall we let him go along, before we clue him in?”

"Psst! Gabriel. Take a gander at that guy. He honestly believes he's training that dog, while the dog is actually training him. Isn't that cute? Gotta love that guy."

The Almighty One could even peek at a cocky kid with a wild rainbow-colored hairdo and a couple of nose rings and say to Himself, “He’s sure shocking his parents, but he’ll grow out of it. What’s funnier … I know what he looks like as a middle-aged man.”

Sometimes, I think God laughs out loud to see some of the wacky scenes we live. Hey, God created humor, so He certainly excels at it. Of course, our loving Heavenly Father's humor probably doesn't ridicule or hurt anyone. More likely, He's just smiling ear to ear and taking divine delight in the mirth of our mere mortality.

Like a parent with precocious preschoolers, God is apt to find it funny and endearing to see us try too hard or consider our own efforts to amount to much more than they do.

Take my recent trip to Egypt, for example.

Yep, our group journeyed right through Tahrir Square in Cairo, just a week before the most recent revolts took place there. While we stayed in our hotel by the Nile River, the Arab League held a momentous meeting about a block away. By God’s grace, our trip was unaffected by these situations.

Then there was the crazy camel ride.

My friend and I, both horse lovers, rallied our fellow travelers (all non-equestrians) for camel rides in the desert behind the famous pyramids.

Our savvy tour guide warned us not to speak to the camel wranglers in front of the pyramids, who aggressively approached travelers to offer extra-pricey rides.

Instead, the guide collected the fees from all of us and paid a strategically designated camel owner directly. Apparently, this dromedary dealer was the most trustworthy of the lot, and he owned enough camels to carry the lot of us. 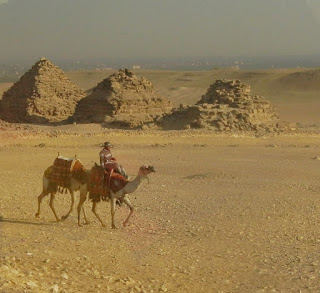 So we loaded up for the big camel ride in the desert.

Our camel handler led us down a hill and off into the now-setting sun for several minutes before stopping to take our photograph. Then he asked my friend if he could keep her baseball cap.

There we sat, atop a giant four-legged creature, trying to negotiate with a whip-brandishing stranger, who suddenly pretended to understand less English than a moment earlier. 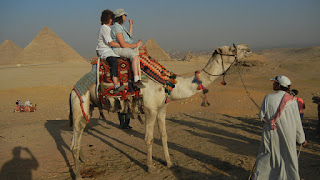 Nearby, the other camel handlers urged our fellow travelers to part with wristwatches, fancy sunglasses, bracelets and other possessions. Tentatively, at least, we all held our ground, while hanging onto the camel saddles.

Finally, the camels trudged back up the hill to the starting point, where they crouched for us to dismount. We handed the camel handlers a few American dollars as tips and thanked them.

Close call! Think God found it funny, watching a couple of American cowgirls and our friends trembling on top of a pack of camels outside Cairo?

I’d bet He absolutely chortled at the sight, even as He dispatched His best guards to stop the camels from bolting with His children.

Someday in eternity, I hope the Mighty One will roll the tapes, showing us the now-unseen spiritual slapstick comedy of our own daily shenanigans and funny foibles. Maybe then, when His character work in us is complete, we will be able to take a joke and laugh hysterically along with the heavenly hosts.

“The LORD makes firm the steps
of the one who delights in Him;
though he may stumble, he will not fall,
for the LORD upholds him with His hand.”
Psalm 37:23-24, NIV
.
.
.
.
Image/s:
Cairo Camel Ride
Photos copyrighted by Nickers and Ink