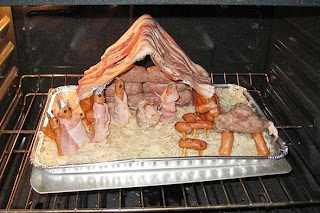 Have you seen the pork nativity scene? Christmas carnivores may find this fabulously fun. Others may sizzle with righteous indignation.

This bacon-lover’s delight first appeared last November. (If you know who first made this complex carnivorous concoction, please say so in a comment, so I can print proper credit here.)

The scene, set on a bed of sauerkraut and photographed inside an open oven, features the crèche cast (sans angels and shepherds).

Mary and Joseph, along with the three wise men, are sausages, wrapped in lunch meat, which is affixed with toothpicks. You can tell the magi by their foil crowns, which match the tin pan in which the scene sits. Sheep are made from cocktail wieners, and a one-hump camel is constructed from a brat with mini-weiner legs.

The stable features a back wall of brats, covered by a peaked bacon roof.

Someone certainly put some work into cooking up the pork nativity scene.

I couldn’t tell you who created it, and I don’t pretend to know the attitude of the clearly creative food artist. Was it a Sunday school teacher, building a Bible lesson his or her students could sink their teeth into? Or was it a sarcastic chef, poking half-baked fun at the birth of the Babe at Bethlehem?

No one knows the intentions of the human heart but God alone (see Psalm 17:3 and Romans 2:2).

Does it matter, in the end, why the pork nativity was first made?

God can use anything to declare His glory.

“All of Your works will thank you, LORD,
and Your faithful followers will praise you.”
(Psalm 145:10, NLT)

Throughout human history, those who know and love Him have sketched and sculpted images to tell His story in unlimited media. From sand castles to mud paintings, from snow scenes to fingernail-scratched cave etchings, folks have created artwork to point to the Lord.

Shipwrecked and abandoned souls have carved sacred scenes in rocks and trees. Prisoners have drawn icons on cell walls in dust, dung, rat guts and even their own blood.

On the other hand, less reverent artisans have produced sarcastic and sacrilegious stuff of infinite varieties as well. From parodies to the practically pornographic, these works have stunned saints and appalled the pious.

Often, however, even the most offensive images have sparked dialogues of faith.

The One who created the pig also made the producer of the pork nativity and the ability to invent artwork. And He can transform sarcastic to sacred and turn mockery into miracles. Even if the crafty crèche creator was earnest, many of those who have forwarded the photos have done so in jest. But still, the message of Christmas has been transmitted all over the internet, as a result.
.
.

How would Jesus feel about a pork nativity?

Regardless of the initial purpose of the meaty manger scene, I can’t help wondering whether Jesus Himself might find this amusing. Our marvelous Messiah loves a good party. He transformed water to wine for a friend’s wedding in Cana. He and the Father have spent nearly 2,000 years preparing for the miraculous Marriage Supper of the Lamb (see Revelation 19).

Sure, Jesus was born Jewish. The rod of Jesse and Son of David probably never ate pork. A bacon and sausage breakfast sculpture is anything but kosher. Still, if even one meat-loving diner learned about the miracle of Christmas while enjoying a tasty meal the illustrating the Reason for the Season, who are we to argue?

Is a carnivore’s crèche any more irreverent than Crown of Thorns Cookies, an Easter Cross Cake, Empty Tomb Cookies, or butter sculpted to resemble the Lamb of God?

Maybe a few hot dogs and some rolled bologna are not baloney, after all. Hey, things could be a whole lot wurst.

True meat lovers, like my son-in-law, whose birthday happens to be Christmas Day, would welcome such a bountiful brunch as the pork nativity. “Bring it on,” he might say, “and God bless us, every one.”
Image/s:
Pork Nativity photo by Greg Chow
.
Shop Amazon's Gift Cards - Perfect Anytime