Bethlehem bummed me out a bit

Bethlehem bummed me out a bit 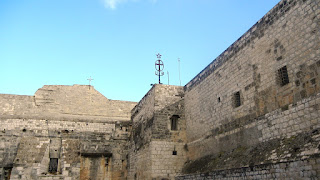 Frankly, I hesitate to say so, but it’s true. I was a little saddened to behold Bethlehem, once I finally saw it for myself.

All my life, I longed to visit the birthplace of the Savior. A year ago, I signed up and paid my deposit for the long-awaited bucket-list journey to the Holy Land. I counted months, then weeks, then days until departure.

Bethlehem was one of the top spots on my list of must-sees, along with Jerusalem and Galilee.

What happened in Bethlehem?

This ancient city carries rich history and spiritual significance, filled with meaning for believers. The City of David, as well as the city of Jesus’ birth, Bethlehem was part of the hill country of Judah.

There, in the town once known as Bethel, Jacob’s beloved Rachel was buried. (Jacob, of course, fathered the 12 tribes of Israel. Rachel gave birth to Joseph and Benjamin.)

Also, David was crowned king in Bethlehem, the city whose name actually means “House of Bread.”

What an appropriate spot for the birthplace of the King of Kings, the Bread of Life and the Light of the World. To Christians, Bethlehem is one of the most sacred locales in the entire world, as it has been since the birth of the Savior. 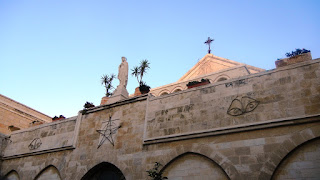 Today, the Palestinian-controlled city of Bethlehem is part of the West Bank. This frequently contested community sits on a hillside overlooking Jerusalem.

Atop the hill is the Church of the Holy Nativity, the traditionally recognized birthplace of Jesus Christ. This church, begun in 327 AD and rebuilt in 565 AD, now houses three different monasteries: Armenian, Greek Orthodox and Roman Catholic. Using separate entrances, this trio of organizations practice their devotions according to clearly defined schedules of accessibility to the facility.

Forgive me. I digress.

Before visiting Bethlehem, our group had to drop off our Israeli tour guide in Jerusalem and pass through a Palestinian checkpoint. There, a Palestinian tour guide boarded our bus and took us directly to a local banquet hall. After we bought our lunches, he loaded us onto the bus and led us nearly next door to a souvenir gift shop. The store owner boarded our bus to make his sales pitch before allowing us to disembark and visit the premises, where salespeople nearly outnumbered the members of our group.

Here’s a free tip for travelers.
You can pretty much assume
prices are inflated for tourists
when merchandise in a foreign country
is marked in American dollars.

Enter through the gift shop. 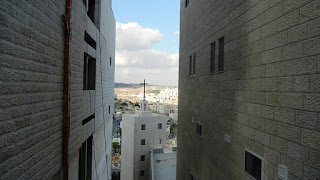 We browsed politely for a while. A few folks purchased olive wood nativity scenes and Christmas tree ornaments. Some picked up rosary beads for Catholic family members and friends.

Stepping outside the shop, we ran the gauntlet of sidewalk sellers, hawking Pashmina shawls and wooden beads, to re-board our bus. At last, we would see the spot where Baby Jesus came to earth.

The tour bus parked in a multi-tiered garage. Our brusque guide hustled us along a busy thoroughfare, past souvenir shops with names like “Nativity Crib” and “Holy Family Imports.” Crossing the street for the final steps up to the Church of the Holy Nativity, we stopped by a police car with flashing lights and an officer offering wooden nativity sets.

Stand in line, and duck for the door. 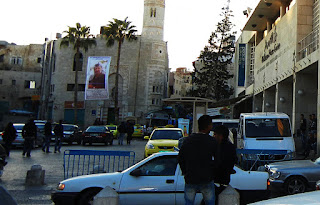 We passed under a political banner with a life-sized portrait of Yassir Arafat on the way into the church’s parking lot. There, we waited to enter the church complex through a tiny door.

Inside the building, we queued up to hear our guide asking our pastor-leaders if they really wanted to stay for the expected one-hour wait. (Actually, wait times can often be considerably longer.)

Well, of course we wanted to wait, after traveling halfway around the world to be there.

Finally, we inched up to the curved stone stairs leading down to the sacred spot. With pilgrims pressing us on all sides, we linked arms to keep from falling into the mysterious underground niche. 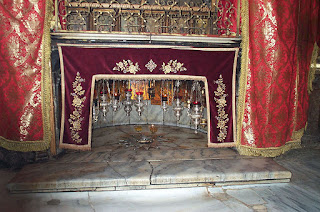 Once inside the holy grotto, we had but a moment to stoop and view, or even touch, the silver star marking the spot where the Virgin Mary is believed to have birthed the Holy Child.

We turned and viewed a metal crib-like structure, presumably marking the spot where Mary may have placed the precious God-man newborn  in the manger.

The actual site in Bethlehem was like no nativity scene I have ever seen.

Almost immediately, the crunch of the crowd moved us to a set of exit stairs, which deposited us back on the main level of the church. There, our guide pointed out altars representing various Christian sects and outlined the rules governing their ability to worship the Lord in the sacred site. 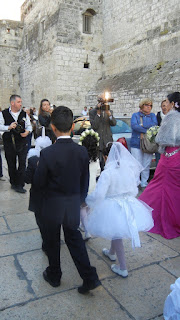 And then it was over. We exited just in time to see a Greek wedding party lined up in the street, complete with sobbing flower girl and blushing ring bearer. We stepped back to let them pass. Immediately, our hasty tour guide bade us depart for the bus.

“Quickly, please!” he called, as a few fellow travelers stopped to browse through sidewalk souvenir displays.

As we settled into our seats, a comic scene unfolded. There, in the parking garage, a particularly motivated young man poked his head into the bus to sell wooden King David flutes. One clever guy in our party talked the kid  down to two for a dollar before collecting cash from about a dozen people and grabbing up the musical merchandise with the bus already rolling. There in Bethlehem, another sales star was born.

All told, our sojourn to the Savior’s birthplace took about five hours, including the requisite luncheon and souvenir stops and border checkpoint delays. Our actual turn in the designated holy place, the grotto of the Church of the Holy Nativity, lasted less than five minutes.

I want my childhood Bethlehem back!

Without a doubt, I am grateful that I had the chance to step into the spot where Jesus was likely born. If it wasn’t exactly that site, we can be sure it was someplace very close to it. But I came away from that iconic experience feeling definitely disappointed and somewhat abashed as a Christian.

I have no doubt that the architects, designers, builders and caretakers of the Church of the Holy Nativity poured their hearts and souls into creating a facility that would honor the birthplace of the Son of God. Surely, they sacrificed time and treasure to make such a spot possible.

Still, it felt somehow like one more example of how humanity clutters the basic secrets of Emmanuel, God with us. Despite our best intentions, how often do we make His love more complex than it really is? 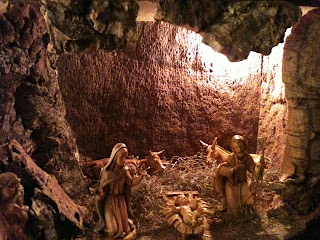 I love the picture of the beautiful infant Christ, sleeping peacefully in a pile of straw, with farm animals peeking in to adore His sweet face.

Maybe it’s because I am a barn girl. I am most at home when my boots are dirty and my animals are happy. But I can’t help feeling that God Himself might agree. I wonder if perhaps God Almighty scratches His head in wonder sometimes, wanting to part the heavens and simply ask, “My precious children! Why have you complicated My truth? It’s so simple!”

The Lord of the Universe could have sent His only Son to be born anywhere on earth. He could have picked a royal princess as His mother. He could have orchestrated His nativity in a castle or a fancy temple.

Instead, He chose a barn in a tiny town. In fact, it was probably more like a dirty cave. He placed His Beloved One in the hands of a teenager, surrounded by smelly livestock.

Returning home from the Holy Land, I couldn’t wait to march into the stables, stand in the manure-filled hay, hug on my horse’s neck, and thank God for His daily blessings.

Sometimes the holiest moments come in unexpected ways. And sometimes the most anticipated spiritual milestones do not prove as meaningful as everyday touches from the hand of God.