Looking at a Light that Led

Looking at a Light that Led
“After Jesus was born
in Bethlehem in Judea,
during the time of King Herod,
Magi from the east came to Jerusalem
and asked,
‘Where is the One
who has been born king of the Jews?
We saw His star when it rose
and have come to worship Him.’”
(Matthew 28:1-2, NIV)
Have you ever followed a star, as the three Magi (or Wise Men) from the Orient did, when they journeyed to Bethlehem to see the infant Christ? 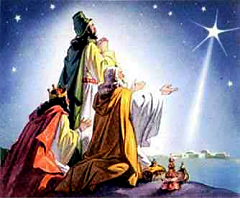 It may sound far-fetched or even a little crazy for men of apparent wisdom and extensive studies  to load up their camels and leave their homes to travel over mountains and across deserts to offer their eccentric (yet intriguingly prophetic) gifts to a baby in a rustic stall in the hills of Judea outside Jerusalem.
What sort of star did the Magi see and follow?
Historians and astronomers have studied the marvels of the heavens and proposed all sorts of hypotheses. Perhaps the star of Bethlehem was a meteor, a solar flare, or even a unique astrological phenomenon.
Whatever it was, the star led these learned ones directly to the spot where Jesus slept in the straw, attended by Mary and Joseph and surrounded by mooing and braying and baaing farm animals.
I have always wondered how the three Magi knew this star was worth heeding.

We don’t know a lot about this trio. Christian tradition names them as Balthazar, Gaspar and Melchior. They were likely noblemen from Eastern backgrounds, rather than Jewish. Although the three Wise Men were not magicians, per se, they obviously followed the movements of the planets and stars. Perhaps they were astrologers.
Clearly, the three Magi were men of means, based on the gifts they brought to the Christ child, as well as their ability to travel as they did.
Somehow, God spoke to these three men, directing them to drop everything and follow His star to the spot where His Son arrived on earth. Undoubtedly, these well-studied men were familiar with Jewish Messianic prophecies, such as these:
“A Star shall come out of Jacob;
a Scepter shall rise out of Israel.”
(Numbers 24:17, NKJV)
“But you, Bethlehem Ephrathah,
though you are little
among the thousands of Judah,
yet out of you shall come forth to Me
the One to be Ruler in Israel.”
(Micah 5:2, NKJV)
.
.
Isn’t God against astrology?
God’s Word warns against worshiping the stars and other created bodies.
“And when you look up to the sky
and see the sun, the moon and the stars –
all the heavenly array –
do not be enticed into bowing down to them
and worshiping things
the LORD your God has apportioned
to all the nations under heaven.”
(Deuteronomy 4:19, NIV)
This caution fits right in with the first commandment:
“You shall have no other gods before Me.”
(Exodus 20:3, ESV)
Divination, a practice using the stars and other signs to predict the future, is expressly prohibited in the Bible (see Leviticus 19:26). Horoscopes and zodiac charts employ such analysis, which directly contrasts with such Scriptures as this:
“Trust in the Lord with all your heart;
do not depend on your own understanding.
Seek His will in all you do,
and He will show you which path to take.”
(Proverbs 3:5-6, NLT)
Surely, the Creator of the heavens and the earth has everything He made at his disposal. If Jehovah God chose to lead a trio of Eastern scholars from the Orient to Bethlehem’s stable by means of a bright star, then this was well within His prerogative to do so. This smacks not of prognostication, but speaks clearly to the Lord’s power over all of nature.
The Light of the World can gather any beam He wants and employ whatever signs He selects to grab man’s attention. And God still leads today in a host of ways. If we wish to follow, we have only to look up.
This Christmas, do we dare to glance beyond the neon, the twinkling colorful strands, and the bright LED displays? Would we rather see a star-studded holiday show or the One whose arrival history’s most special star announced?
What do we seek this Yuletide season?
None of these choices is necessarily bad, in and of itself. Perhaps this is one more issue of balance and focus and attitude. If God chooses to lead us this Christmas, will we see His sign?
Somebody stop me. I’m preaching to the mirror again.
Related Items:
How to Create an Outdoor Christmas Living Nativity Scene
The Gospel Ladder
His Story - a Poetic Tribute to the King Absolute
.
.
Image/s:
Three Magi and Bethlehem’s Star
Public Domain Artwork