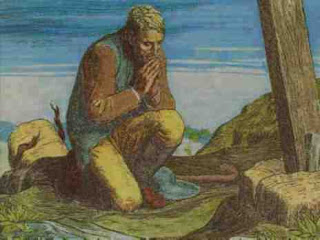 “Amon was twenty-two years old when he became king,

and he reigned in Jerusalem two years.

He did evil in the eyes of the LORD,

as his father Manasseh had done.

to all the idols Manasseh had made.

But unlike his father Manasseh,

he did not humble himself before the LORD;

Manasseh, Amon’s father, had been guilty of idolatry, but he had come to repentance. His son Amon, however, refused to repent of his sin. He persisted in his idolatry and rebellion against the word of the Lord.

How did things turn out for Amon?

Amon’s own staffers murdered him in his palace, and his eight-year old son Josiah ascended to Judah’s throne.

What is the worst sin of all?

Isn’t it tempting to categorize and prioritize sin? Maybe this makes us feel better about ourselves, if we can create a ladder of licentiousness, ranking the potential evils men may do. If we find ourselves free of the apparently wickedest woes, then we may feel like congratulating ourselves for our apparent virtues.

What a dangerous practice. Sin is surely sin. The Lord is perfect, without sin, and He refuses to tolerate any inkling of evil.

How blessed we are that He has paid the price for all of our sin. All we need to do is confess and turn from our sin, walking into His wonderful redemption. Repentance is the key, as we reject our sin and accept the Lord.

Doesn’t that make refusing to repent the most dangerous sin of all?

Draw our hearts to You.

Bend or break our wills,

And give us the grace

To turn away from sin

And turn towards Your holiness.

Over what grieves Your heart.

Teach us to trust You,

And plant in us

And accept Your Word.

Thank You for the cross,

Where You bought us back

With Your own blood.