A to Z Answers: Overflowing with Ordinariness

Sometimes I feel exceptionally ordinary, but I think that’s OK.

Sure, everyone can be outstanding in some area. Anyone can make a mark, even in a small way. But we need not all be superstars.

I guess I’m learning that God’s not asking me to change the world.

He’s already done that. I just have to follow Him. If I obey Him, He promises to make me an overcomer. That doesn’t mean I’ll be rich and famous. It simply means He’ll work through me somehow.

Yes, I can be frustrated with my own failures. I can wring my hands and sigh over struggles. But in the big picture, I know my God is forever fond of me. (He adores you too!)

In fact, I wouldn’t be surprised if the Father simply chuckles when He sees me kicking and screaming over some silly little thing. I’m convinced God has a sense of humor. After all, He created toddlers and teenagers.

The Holy One poured His power into 12 very ordinary men, who walked and talked with His Son on earth and then went on to begin the Church. Those guys were not sports celebrities, movie stars, or best-selling authors. They wouldn’t have made any A-lists by the world’s standards.

Clearly, Christ wasn’t regarding resumes. Jesus tagged a couple of fishermen, a tax collector, a rebel-outlaw, and a bunch of unknowns. The one who might have been a banker or accountant ended up betraying Him.

But the Lord chose them as His own.

These ordinary men were minding their own business (for the most part), and Jesus walked up and hand-picked them. Most of them were probably shocked at the time, as they didn’t seem to fancy themselves as local luminaries.

But they followed. And it’s likely all but one gave their lives for their faith in Him. 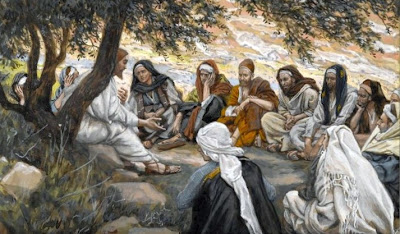 I used to want to be “somebody.”

Lately, I’m growing ever more content with the idea of simply being “Somebody’s.” Belonging to the Master of the Universe, who calls me His Beloved is more than enough.

Did I mention He’s crazy about me?

The LORD appeared to us in the past, saying:
“I have loved you with an everlasting love;
I have drawn you with unfailing kindness.
(Jeremiah 31:3, NIV)

All it takes to change the world is a bunch of ordinary people, who have experienced God’s extraordinary grace.
.
.

Hey, I can do “ordinary.” How about you?

Image/s:
Tantrum by Aarandir
Creative Commons Licensing/Wikipedia Commons
The Exhortation of the Apostles
By James Joseph Jacques Tissot
Circa 1890
Public Domain/Wikipedia Commons
A to Z Blogging Challenge 2012 logo
Fair Use
.
.