A to Z Answers: Enthusiasm in Emptiness

“Hosanna! Blessed is He who comes in the name of the Lord.”

Some of us may have shouted these lines of praise with exuberance or even energy. Others may have omitted the oomph, but intended it earnestly.

Either way, the exaltation holds true.

Early in the first century (AD), the One who would become the Savior of the world climbed onto a donkey colt and began the descent from the Mount of Olives into Jerusalem.

One might say it all went downhill from there.

I've been there. Last fall, I walked the steep and rocky road (see photos) from the Mount of Olives to the gates of Jerusalem.

It's rough going, but it was particularly so for the Lamb of God.
Within just a few critical days, Jesus of Nazareth was arrested, beaten, and nailed to a cross for the most painful and shameful death the Romans occupying Israel could devise.

Even at the time of His capture in the Garden of Gethsemane, not long after celebrating the Passover Seder dinner with His closest disciples, Yeshua the Messiah could have felt rather empty.

He fell on His face in the rocky garden, weeping under the olive trees, and pouring out His heart before the Father.

Yes, even Jesus may have felt simply spent.

After an eternity of preparation and a little more than 30 years of life in a mortal frame, the Prince of Peace was poured out.

The following day, He even cried out from the cross, bemoaning the apparent absence of the Almighty.

I’ve often wrestled with those words in my own heart.

If Jesus is God, as the doctrine of the Trinity declares, how could God have turned away from Him? On the other hand, could there have been any moment in all history when Jesus was more fully human?

Surely, our Wonderful Counselor understands emptiness. He felt it firsthand, as He followed the Father’s plan all the way to the cross at Calvary and beyond into a victory that rewrote history and eternity.

Have you ever felt depleted or empty?

I know I have.

For most of my life, loved ones have characterized me as energetic and enthusiastic. Some have even complained about my seemingly inexhaustible engine. 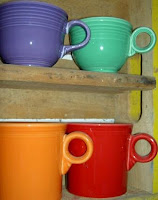 Now living with an ongoing health condition that randomly reduces my endurance to exhaustion and my get-up-and-go to got-up-and-went, I have a new understanding of emptiness.

Still, I have come to believe that enthusiasm actually has little to do with energy. It’s all about spirit.

And spirit can come quietly at times.

We may receive a sudden spurt of energy and power, or we may have a steady stream of sureness that we’re in the right hands, after all.

Sometimes, God even fills us up just to pour us out again for His purpose.

What happens when a cup is empty?

Consider a coffee cup. Once the dregs are drained, it can be filled with something new that simply simmers with a flurry of flavor.

Maybe that’s what God wants to do.

Recently, I reread a familiar Bible account that speaks of the exceeding value of emptiness.

The wife of a man from the company of the prophets cried out to Elisha, “Your servant my husband is dead, and you know that he revered the LORD. But now his creditor is coming to take my two boys as his slaves.”
Elisha replied to her, “How can I help you? Tell me, what do you have in your house?”
“Your servant has nothing there at all,” she said, “except a small jar of olive oil.”
Elisha said, “Go around and ask all your neighbors for empty jars. Don’t ask for just a few. 4 Then go inside and shut the door behind you and your sons. Pour oil into all the jars, and as each is filled, put it to one side.”
She left him and shut the door behind her and her sons. They brought the jars to her and she kept pouring. When all the jars were full, she said to her son, “Bring me another one.”
But he replied, “There is not a jar left.” Then the oil stopped flowing.
She went and told the man of God, and he said, “Go, sell the oil and pay your debts. You and your sons can live on what is left.”
(2 Kings 4:1-7, NIV)

Look again. How long did the olive oil continue to flow for the destitute widow? The rich fluid continued until all of the empty jars had been filled. No oil was added to any jars with any existing contents, only those with total availability received the fresh, new contents.

OK, Lord. Maybe emptiness is not such a bad thing, after all, if it makes us available for Your answer.

This Easter season, may we grow enthusiastic when we are empty, eagerly awaiting a supernatural overflow.