A to Z Answers: Neutrality is Nothing

I saw a man walking down the center of the street downtown today, straddling the double yellow center stripes with his footsteps.

Stripe straddling may be illegal. It’s certainly dangerous. But at least the guy knew where he was going. Actually, he was headed due north. His public promenade was anything but noncommittal.

What happens when we try to be neutral in life?

A man I know, who tends to hold extremely strong opinions when he is confident of his own conclusions, often issues a canned quip when he’s asked for a commitment on a controversy.

“I’m Switzerland,” he says. What he means is this: “I’m not willing to take a stand on this topic.” Basically, he’s pleading the Fifth Amendment, invoking his right to refuse to answer.

Remember? Throughout the nation’s history, Switzerland has frequently declared neutrality in major world conflicts. For the Swiss, this actively passive stance has spelled national security.

That sounds like safe answer, but it’s really not.

In personal real-life application, neutrality is its own form of partiality. Even a non-stand is a stand of sorts. 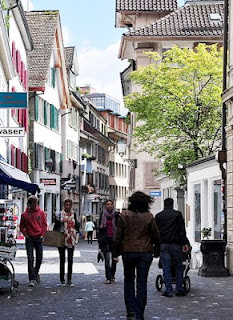 And yet we likely all respond in similar ways at times. Maybe we’re not sure of a situation. Perhaps we’re hedging our bets. We could be stalling for time, so we can dig a bit deeper before drawing our own conclusions.

Still, we can’t all be Switzerland.

What about faith? Is it possible to ride the proverbial fence line, refusing to commit to monotheism, pantheism, deism, atheism, or something else altogether? That’s pretty much where agnosticism came along in the first place, offering a catch-all compartment for those who don’t want to make a decision about God’s existence and impact on human lives.

Is that a safe bet?

The Bible talks directly about namby-pamby neutrality. A person either believes, or he doesn’t. It’s that simple.

If any of you lacks wisdom, you should ask God, who gives generously to all without finding fault, and it will be given to you.
But when you ask, you must believe and not doubt, because the one who doubts is like a wave of the sea, blown and tossed by the wind. That person should not expect to receive anything from the Lord. Such a person is double-minded and unstable in all they do.
(James 1:5-8, NIV)

I am the gate; whoever enters through me will be saved. He will come in and go out, and find pasture.
(John 10:9, NIV)

Personally, I’ve been to Switzerland. It’s one of my favorite places in the entire world. I love the old castles, the cobblestone pedestrian streets and the Alpine scenery. I adore the delicious chocolates, cheeses and confections. And the Swiss people are tremendous.

Still, I don't wanna be Switzerland when it comes to neutrality.

I pray for the strength to take a stand.

When it comes to choices for eternity, there simply is no middle ground. I choose Christ, in whom is found all I need. Neutrality is nothing.