January 2nd - A Question of Offerings

Monochromes of Cain and Abel

From the Ghent Altarpiece

A Question of Offerings 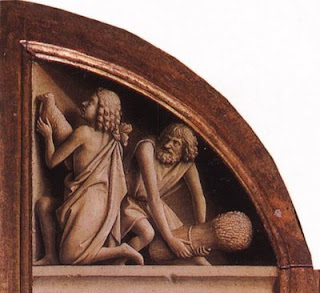 It is intriguing to consider that people outside the Judeo-Christian faith include this story in their own early religious writings, recording the first murder in human history. Microsoft even uses "Cain and Abel" as a password recovery tool for certain operating systems.

The biblical account of Cain and Abel includes several firsts: the first divine worship rites, the first worship offerings to the Lord, the first sibling rivalry, the first homicide and the first fratricide.

Farmer Cain and flock-tender Abel brought their offerings to the Lord. Cain brought grain, and Abel brought a lamb. As the Bible recounts, the Lord accepted Abel's offering, but He rejected Cain's.

Why did God refuse to accept Cain's sacrifice? Is God anti-vegan? Of course not. Was a grain sacrifice offensive to God? Probably not. Throughout the Old Testament, God's people made sacrifice of all kinds: grain, creature and coin.

Hebrews 11:4 contains the secret: "By faith Abel offered God a better sacrifice than Cain did. By faith he was commended as a righteous man, when God spoke well of his offerings. And by faith he still speaks, even though he is dead" (NIV).

So God was pleased with Abel's sacrifice, but even more by his faith. And Cain was enraged to see the Lord favoring his brother.

As Cain raised his hand against his brother Abel, a legacy of interpersonal, conflict, hatred, struggle and strife was begun.

“Am I my brother’s keeper?” Cain asked the Lord, when he was confronted for his sin (see Genesis 4:8-9).

Cain offered an unacceptable offering of worship to God, slew his brother and attempted to conceal his evil deeds.

God, the Righteous One, can speak nothing but truth. The Lord clearly revealed the natural and supernatural consequences of Cain’s sin:

“When you work the ground, it will no longer yield its crops for you.

You will be a restless wanderer on the earth.”

How often do we mimic the actions of Cain? Do we offer halfhearted worship, faithless prayers, distracted devotions or cheap sacrifices to the Lord? Do we rationalize our sin by making excuses or comparing our own conduct to that of others? Do we try to deceive ourselves or even our omniscient God? If we do so, can we honestly expect God to bless our crops, careers, communities and constitutions with His favor? 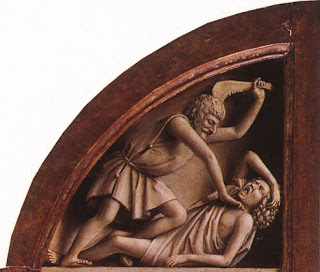 As we launch into a new year, will we aim to become people of divine purpose or restless wanderers?

and know my heart;

test me and know my anxious thoughts.

See if there is any offensive way in me,

and lead me in the way everlasting.”

Would you pray with me?

Yet, day after day, I still stray.

Rebuild my devotion, I pray.