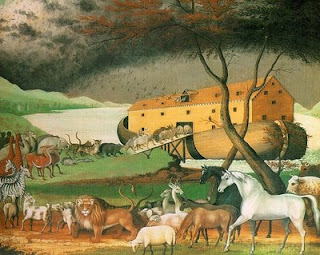 As generations grew upon the earth, God surveyed the scene, knowing wickedness was growing ever faster and more prevalent.

Although a few remained faithful, many individuals began to honor and adore those that were physically attractive and virulent, such as the Nephilim. (Some Bible scholars believe the Nephilim may have been fallen angels, or half-human/half-angelic beings.) This race of giants (from which eventually sprang the Philistine Goliath) were revered as heroes. The people of God found these folks alluring, and many intermarried with them.

This practice diluted the generational legacy of historic faith, which God had built through their forefathers, with their unusual longevity (see chart - below). 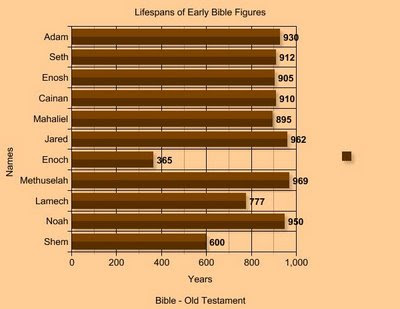 Noah and his family alone clung to the God of their fathers. God honored their faith and preserved this tiny remnant, when He brought the epic flood to destroy and recreate the face of the earth.

Perhaps Noah and his family were not the mightiest athletes, the most fashionable models, the wealthiest entrepreneurs or the superlatively talented musical and dramatic performers of their time. Yet, God chose to rescue them, rather than those the world might have called beautiful or celebrities. And Noah trusted and obeyed God, building and boarding the ark despite the derision of those around him.

What makes a hero, in God’s Book? On whom might God’s spotlight shine brightest? 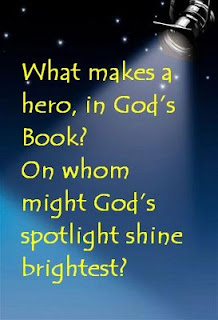 Even today, popular culture celebrates the infamous, the sinister and the notorious. Will we choose to fawn over those who favor the flesh, or will we side with the faithful minority? Even if others sneer at us, as they did at the ark-building Noah, will we follow the call of the Lord? The call of the crowd can seem considerably more compelling.

"The Lord does not look at the things man looks at.

Man looks at the outward appearance,

but the Lord looks at the heart."

Would you pray with me?

Only You are worthy of true praise.

Remind me of Your holiness.

Reveal to me a glimpse of Your greatness.

As I seek Your face.

Draw me ever closer,

That I may desire none other.