January 26th - The Cloud, The Fire and The Wind

The Cloud, The Fire and The Wind 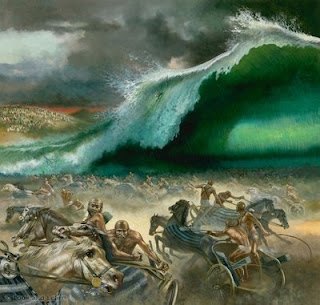 As Egypt reeled from the deaths of all of the firstborn, from sons to livestock, God led His people to freedom. Jehovah God appeared to the Hebrews as a pillar of cloud by day and a pillar of fire by night, clearly marking the way they should follow. Curiously, the Lord led them not through the land of the Philistines, but along the shore of the Red Sea.

Pharaoh discovered the path the Hebrews had taken, he assumed they would become easy prey for his armies. He dispatched his warriors and their chariots, several hundred strong.

Seeing the Egyptian armies pursuing them, the Hebrew people became afraid and complained to Moses. But Moses knew he had heard from God, so he replied:

"Do not be afraid.

and you will see the deliverance

the Lord will bring you today.

The Egyptians you see today

you will never see again.

The Lord will fight for you;

you need only to be still."

God told Moses to raise his staff over the waters of the Red Sea. The Lord sent a great and powerful wind to part the waters, and His people walked across safely on dry land.

How long did this take?

We can only guess the duration of the trip. Archaeologists are not certain exactly where the Hebrews crossed the Red Sea, although ancient artifacts (such as chariot wheels) have been discovered underwater over the years. The distance across the Red Sea could have ranged from a few miles to forty or fifty miles, depending on the location.

We do know that the Hebrews numbered well over a million, having approximately 600,000 men, plus women and children (see Exodus 12:37). We also know that this great horde of people were traveling by foot.

God’s great power must have held back the waters of the Red Sea for several hours at least.

As soon as God’s people had crossed the Red Sea and arrived upon the shore, the Lord instructed Moses to stretch his staff back across the sea again. Then God allowed the waters to close, swirling over the entire Egyptian army.

What a wondrous and powerful Protector we have. God knew the Egyptians greatly outnumbered His people, so He defended them directly. He demonstrated His might on behalf of those He loved.

Will God not protect you and me as well?

What kind of deliverance do you need from the Lord today? Do you need His clear guidance or His mighty victory?

Perhaps you have been asking God for a merciful healing, a mighty miracle in your finances or family, or even a revelation of His will for your life. God is surely able.

What battles have you been fighting? What worries disturb your rest? Where do you most need God to step in and take over?

If our omnipotent God could part the waters for His people, He can surely meet you where you need Him most as well.

You whose Name was once considered

Too holy to mention aloud,

Restore our reverence for You.

How we need Your rescue

We need the guidance of

We need the power of the Holy Spirit,

Who can whisper in the clouds

And from the perils we may face.

May we sing Your praises evermore,

For the victory You have already won.