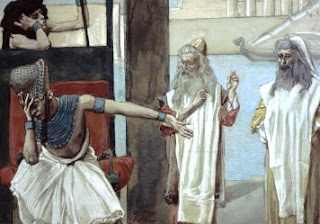 Let’s review the ten plagues God sent upon Pharaoh and the Egyptians, when he refused to allow Moses and the Israelites go.

Here are the ten plagues, arranged in chronological order, although the letters are scrambled. Can you figure them out? (Feel free to refer to the Scripture reading for clues.)

Hello? Did Pharaoh need to have his ears cleaned out?

It’s certainly easy to frown upon Pharaoh for his hard-heartedness. Moses warned him, after all, as God sent plague after plague after plague upon Egypt. Time and again, Pharaoh claimed to give in, only to deny the agreement soon afterwards, most often as soon as the plague was lifted.

How we love to point at old Pharaoh and dub him “faithless” or "clueless." And perhaps he was. Quite possibly, his heart held another allegiance altogether. Is it likely that Pharaoh's ears were clogged?

Maybe my ears are a bit clogged too, at times.

I know I have hosted a hard heart at times. How many warnings has the Lord given me, when I have ignored His quiet calling, then his more direct nudge? Why does it sometimes take a dramatic display of danger or disappointment for me to recognize my need to obey and heed the Lord?

May God soften my heart – and any others who need softening as well. How much simpler might life be, if we listened to God a whole lot sooner? What struggles and sorrows might we avoid, if we followed His leading immediately, rather than tromping off on our own? What trials must the Lord allow into our lives, simply so we may cry out for His loving rescue?

I would much rather live within the safe bounds of God’s will than out on the precipice of my own self-designed perils. How I desire to walk with the Lord, rather than trying to stand against him. How about you?

“He who is not with me is against Me,

and he who does not gather with Me scatters.”

You call us by name.

You know every detail of our daily lives.

Guide us to trust You.

Teach us to hear Your call.

Urge us to listen

The first time You speak.

And open our ears,

So we will answer,