although it is not graphically expressed.

Shechem images (below) courtesy of The Bible Picture Gallery. 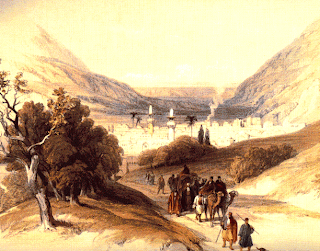 Folks can grow fierce, when a family member is attacked. The sons of Israel were no exception to this rule.

Prince Shechem, on the other hand, claimed to love young Dinah and sought to marry her. (When this occurred, Dinah had probably reached a marriageable age for the times, such as 15 or 16 years old, according to Wesley’s Notes on the Bible.) Of course, the match would have been a strategic political and economic move for the prince, as the union would have created an alliance with Israel’s ever-growing family.

Feigning agreement, Israel’s sons insisted that all of the men of Shechem be circumcised, just like them. Shechem’s men agree heartily to the uncomfortable procedure, hoping to gain access to the wealth and connections of Israel’s clan.

As we have read, the promise turned out to be a ploy. Two of Israel’s oldest sons, Simeon and Levi, attacked and slaughtered the recuperating men of Shechem. Then their brothers joined them to plunder the city.

Interestingly enough, not one chapter later, Israel’s eldest son Reuben committed a similar sin with his father’s own concubine Bilhah (see Genesis 35:32). Bilhah was the mother of Reuben’s brothers Dan and Naphtali. Reuben slept with Bilhah while his father was grieving the death of his beloved wife Rachel.

What motivated the actions of the sons of Israel? Were they zealous for their sister’s honor, hungry for vengeance or merely seeking power in the region?

How often do we attempt to make excuses for our actions by claiming virtuous reasons, rather than measuring our real motives? Do we honestly examine our own hearts, as we set out hurriedly to right real or perceived wrongs?

British poet Alfred Lord Byron expressed this truth so authentically: “We are all selfish, and I no more trust myself than others with a good motive.”

Samuel Taylor Coleridge, another British poet, said it thus: “No one does anything from a single motive.”

Is it even possible for us to carry pure motives, while we live in our human flesh?

“All the ways of a man are pure in his own eyes,

but the Lord weighs the spirits

(the thoughts and intents of the heart).”

What were the results of Israel’s sons’ rash action? Apparently, their father Israel was displeased with their violent and deceitful tactics, claiming they had jeopardized the family’s future safety in Canaan. Israel was undoubtedly hurt by the harm done to his only daughter, Dinah, but he did not agree with his sons’ exploits.

How can we fend off the temptation to overreact, when we are wronged? How difficult it can be to gauge the appropriate response to deliberate or even accidental harm.

Leave that to the righteous anger of God.

For the Scriptures say,

‘I will take revenge;

I will pay them back,’

Certainly, justice is important. Faithful ones have laid down their lives, so that others may enjoy the benefits of living in a just society.

Where can we find the balance between truth and tact, justice and mercy, and law and love?

You are the only Holy Judge,

Who tempers justice and mercy.

Your grace trumps our grievances,

And Your wisdom outweighs our worries.

Teach us to trust You with the outcome,

Particularly when we are

May we place the ends in Your holy hands.

For You hold the future.